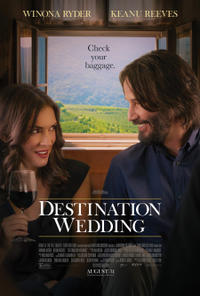 Keanu Reaves and Winona Ryder are invited by their friends to a destination wedding. Nothing like going to a beautiful location, and not being allowed to enjoy it because you are forced to attend a loved ones inclusive wedding and events. Both are strong personalities, both miserable people who love to fight, and as a result they are both placed together in all events and tables because the wedded couple don’t want to force them on their other friends. While the two are miserable, and hate each other, they find out that they are good at being miserable together.

This is a cute romantic comedy for a more cynical generation. I love it! I’m actually really excited to see this. In my head though, I’m pretending that this is the prequal to John Wick and this is the woman who convinces him to leave the life of murdering people. That they hate everyone else so much that they care for each other and their love to hate others makes them more complete people before she dies of cancer or something. I don’t remember a lot about John Wick except for the fact that he is a bad ass killing machine. 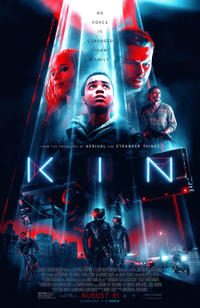 A young man, Jack Reynor, gets out of prison. He returns to his family, a father, Dennis Quaid, and a younger sibling, Myles Truitt. Reynor was involved with some shifty criminals before going away, James Franco, and still owes them money. Reynor is trying to make his life right, and to be there for Truitt, when Franco prevents him from truly rebuilding his life. While trying to follow his brother around, Truitt discovers a small battle in an abandoned building. The battle was with aliens, and a amazingly destructive weapon is left behind in the onslaught. Truitt decides to use the weapon to save his brother. In using the weapon, Truitt puts himself on the radar of the cirminals, the feds, and the otherworldy soldiers. Reynor takes Truitt on the run to keep him safe.

This movie looks amazing. The story of Reynor’s past is blah, but the rest of the movie looks so beautiful and well put together it makes you wonder why all the trailers are leading with the story of Reynor’s troubled youth instead of focusing on Truitt’s side of things. It is PG-13, so take the slightly older kids to see this movie, but it’s going to be a good movie for the family that will show the value of family, while also showing the cost of sacrifice. 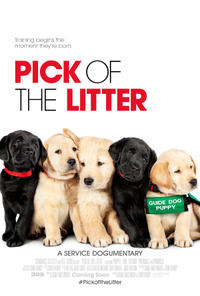 This is the first time I am doing a break down of a documentary. While most people automatically turn down documentaries, this one checks a lot of boxes that documentaries don’t. For one, puppies! Two, PUPPIES! I mean seriously, one of the most love creatures on this planet are dogs, and I know quite a few people who are going to watch this movie just to watch the dogs grow up, and learn how to do amazing things. Additionally, due to the subject matter, unlike movies where the dog dies in the end to force a response in the viewer, this documentary will likely end with dogs selected to be guide dogs, and dogs not making the cut. No dead dogs. I mean I make no promises, it could take a dark turn. 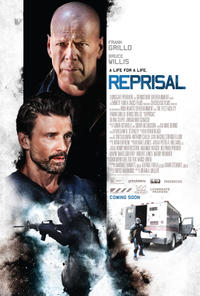 A bank teller, Frank Grillo, witnesses a bank robbery at his job, that takes the life of a coworker. He is troubled by his survivors guilt, and wishes he would have done something, but his family is just happy he survived. The police believe it was an inside job and start to question him. While the police are running in circles trying to find out if he is responsible, Grillo inlists the aid of his neighbor, Bruce Willis, a retired cop, to help find the criminal and bring him to justice. Things get out of hand, when he gets to close to the criminal, and he begins to hunt Grillo, putting Grillo’s family in danger.

This is your traditional action flick of the week. If you are looking for more Willis has had enough, and breaks bad, murdering people. Then this is your film. Be forwarned though Grillo is the protaganist and Willis is just the supporting character. So there will be more Grillo running, and Willis sitting in the chair on the phone. It’s better this way, Willis’ knees probably can’t take all that running anymore. 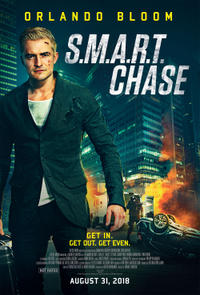 A organization of valuble item transporters get a job to transport a priceless artifact. They are the best at what they do, and they know it. Their cocky attitude allows them to be defeated by a weathy socialite who wont take no for an answer. The loss of the artifact destroys their reputation, and their business. The organization falls apart, and their leader, Orlando Bloom, is emotionally destroyed. After a small period of time, Bloom decides that the only way to regain their reputation is to steal the artifact back. He gets the group back together, to try to rebuild what they lost.

This isn’t your traditional action reverse heist film. It’s not being produced by a big box office picture house. It’s more of an international film in it’s cast and locations. For this reason it likely wont do very well in America, but will probably be amazing overseas. I imagine this film will be worth the price of admission, and if you decided to watch this film, instead of REPRISAL, you can hold over your friends heads how much more cultured you are, then they are.