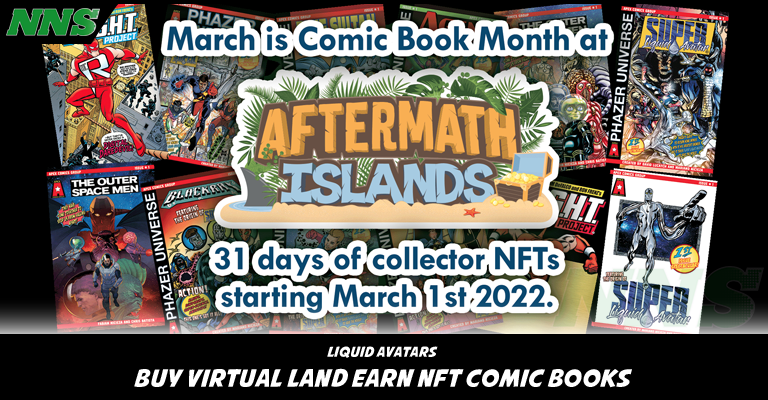 The metaverse is upon us, and you too can own a chunk of your own digital land! One such company that we have trusted when it comes to NFT(s) and other block-chain items is Liquid Avatar and their partners at Oasis Digital Studios.

This company has done a great job in the past connecting the geek masses to creators, allowing them to change the platforms that artists are able to connect with their fans.

One great way they have done so in the past has been in the creation of NFT comic books. A new and amazing step into the form which allows fans to not only own a digital version of their favorite comics in a unique and amazing way but also allow for further variant covers, as well as an increase in value of the comic book as collectibles.

We talk a little bit more about NFT(s) in this space as well as how this program works, as we sat down with David Lucatch. See what he had to say!

Eric Bryan Seuthe II: More and more the Metaverse is becoming a topic of interest for companies. Corporations regularly latch on to buzzwords for marketing purposes and to capture the general population’s attention. That being said though, what does the Metaverse mean to you?

David Lucatch: To us, the Metaverse is part of the rise of Web 3.0 which is the next evolution of the Internet. While there are many interpretations of what Web 3.0 is and to whom, we see it as “immersive, self-governed and decentralized.” The Metaverse will represent the ability to create extended reality, and immersive experiences to play, work, learn, game, entertain, socialize, and earn. It will also give us a chance to reset who we engage with and, using digital identity verification, provide validation of “good actors” and real people.

Eric: Comic books have always been something that I regularly enjoyed as a tactile sensation as a child. I have many friends who thoroughly enjoy the idea of sitting down with their tablets and thumbing through the digital pages of their collection. What would you say is a major selling point for old-school readers and modern adapters that might pull them into collecting your Digital NFT comic books?

David: As a collector myself since a young child, this is a change for me too, but a welcome one. The ability to purchase, read and collect new digital versions of both recent and back issues gives me the freedom of portability that I don’t have with my current collection. I’m not going to bring all my back issues of a storyline to read with me on vacation as they are way too bulky, but I can easily do that with digital versions. Digital comic books also allow a publisher to create new and exciting limited and variant versions of a book without the commitment of large-scale print costs, giving readers potentially more variety.

Eric: Comic books in the past have been a project that often misses publication deadlines. Are all of the 31 Digital NFT Comic Books completed, or are they still in production?

David: The main books are all in print, but some of the variant covers are only available digitally.

Eric: With comic books starting off at a price of pennies, in the olden days, and eventually being closer to $6 or $7 depending on the size of a single issue of a comic, where does the value come from in your projects to justify a $100 price point for your Digital NFT Comic Books?

Eric: With 3-4 variations to each Digital NFT comic book, is this akin to alternative comic books in the physical medium?

David: Alternative covers yes, but a single storyline per title.

Eric: I know Oasis Digital Studios is creating a Metaverse paradise with Aftermath Islands, and March is a major push for comics in relation to the project, but how will the comics interact with the virtual land?

David: We’ve created Collector Isle, a virtual island dedicated to the collector industry. We have a lot of surprises in store for that themed island related to some of the social and physical events that currently many collectors miss as they’re unable to travel to events.

Eric: There is mention about how if a person spends $2,500 during the month of March they will receive all 31 Digital NFT Comic books, does that relate specifically to the Digital NFT comic books or any purchase made throughout the Aftermath Island?

David: Again, our digital comics are FREE with any qualified purchase of virtual land. We’re giving away one per day, but if someone purchases $2,500 or more in virtual land, they get the whole set.

David: On our web page, which is accessible through Aftermath Islands, https://aftermathislands.com/comic-book-month/, you can see the daily drop. It is not random but has been planned so that collectors can see what’s available and plan their virtual land purchases accordingly.

We personally won our own voucher for land on Aftermath Islands thanks to Liquid Avatar‘s Los Angeles Comic Con scavenger hunt, do you own virtual land yet?