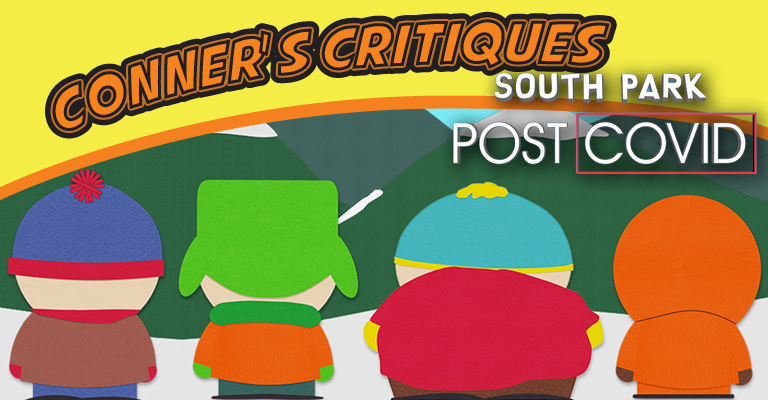 As part of their deal with Paramount+, the people behind South Park, Matt Stone and Trey Parker have contracted to 14! movies exclusively to the streaming service. The first two have already dropped on the service, and focus on COVID-19. This is not to be confused with their COVID Special episode.

Let’s break them down individually though, as they are both stand alone movies that continue a story. As always, when we tackle our reviews by breaking them down into Story, Acting, and Overall.

The story immediately picks up well into the future as the children are in their fifties. Having left off from the very last episode of the season, the boys have decided to split ways. Now years later, the boys have not seen each other since.

When the famed researcher and philanthropist, Kenny McCormick, yes that Kenny, dies, it acts as a reason for the group to reunite.

The original gang, minus Kenny, head back to South Park, and try to figure out what happened. and what it means going forward.

Before they can find out though, the city of South Park is quarantined due to the discovery that a new strain of COVID-19 is the reason that Kenny McCormick died.

It’s interesting for the voice actors, not just Parker and Stone, to voice their characters as adults. Some of them are literally the actors normal voice, and others are interesting variations of the traditional voice performed. I’m looking at you Cartman.

For the most part, it was a fun journey told through frustration and resentment in a world that is incredibly believable looking at how horrible we are handling this pandemic.

At the end of the day though, nothing really new is performed here that stands out as amazing.

It’s a fun run, I won’t lie. I don’t know if this story needed to be told over two films, but that’s probably a discussion for the second movie’s critique. That being said, my biggest issue is that the conclusion of the movie felt harsh, rushed, and confusing.

A lot of shows, specifically time stunted animated series, have a hard time keeping not only the quality but energy up over the years. Whatever rating we could possibly give this, we have to commend the creators for keeping the style going at the same level of humor and skill.