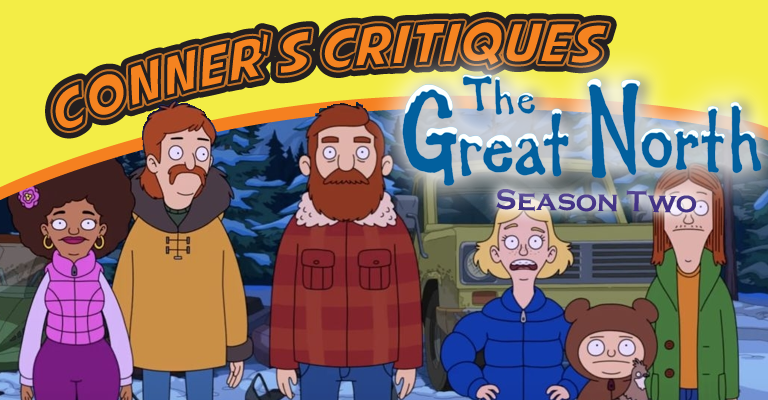 The great North has just wrapped its second season. This family focused animated series on Fox is the spiritual successor to Bob’s Burgers, without the need for the predecessor to vanish to be able to enjoy it. Let’s talk about if you should renew your interest in the series to watch the new season.

As always our reviews breakdown the show by story, acting, and overall. So let’s jump on in!

The season picks up right where the last one left off, Honeybee and Wolf are now married, still living in the guest house on the property. Ham is in an incredibly cute relationship with Chrispin, Judy is looking for new ways to express herself creativity-wise, and Moon is … well Moon.

As far as topics, this season covers a lot. Topics like fear of growing up, fear of being overlooked, fear of being different, and fear of not being enough. A lot of fears are covered.

But thanks to their incredibly sweet, almost to a sickening level, family dynamic the Tobins get through every single one of these issues. Usually in a hilarious and fun way.

Once again the series is voice acted by an amazing group of talented actors. My favorites of t his show are always going to be Wolf, played by Will Forte, and Beef Tobin, played by Nick Offerman.

“Everybody does an amazing job portraying their loveable and quirky characters, as well as the depths of their fears, and the family’s bond.”

That’s not the limit though of the amazing work and voice talent within the series. Everybody does an amazing job portraying their loveable and quirky characters, as well as the depths of their fears, and the family’s bond. Whether it’s when they’re being supportive, or when they’re the ones that need to be supported. It doesn’t matter because their love and support for one another gets them through.

While the incredibly sweet nature of the family might be a bit much for some people, especially if you come from a dysfunctional home (just kidding… not kidding), there’s just something fun and loveable about this cast of characters. Especially considering how well they work together and support one another. There are very few shows out there on television these days that showcases a strong and healthy family dynamic, but this is one of them!

It may still be to early, but I really want to see a crossover episode between this series and Bob’s Burgers. With Bob’s Burgers getting their own movie, it feels like this would be a good time for there to be a type of crossover. The only problem is how do you get the cast of characters from Bob’s Burgers up to Alaska where The Great North takes place, or the Tobins all the way to Bob’s Burgers’ neck of the woods.

Who knows, but if they can do an Archer crossover, they can make this work too!