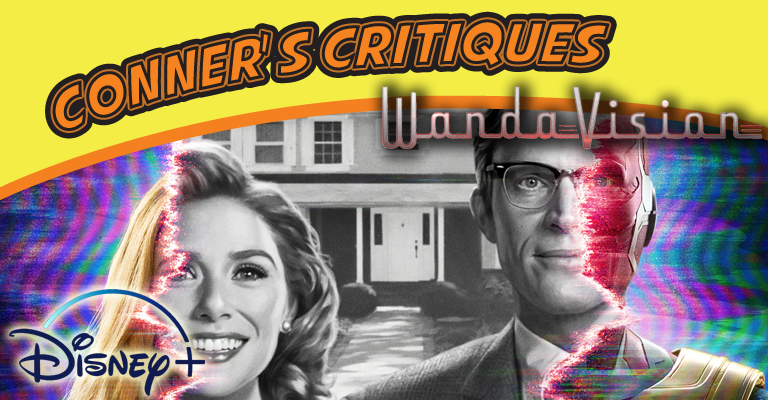 We had a very long year in 2020 and so did Marvel with having to deal with what was going on in the world. Just in case you didn’t know, 2020 was the first year Marvel DID NOT PUT OUT ANY CONTENT SINCE 2007. That’s right people, 13 straight fabulous years of Marvel every year and then right when Phase 3 ended, we got a years lull. Maybe it was a blessing? Because what we got out of this was WandaVision, and I have to say it was amazing. Nothing like what I expected it to be and the hush hush on the whole thing was very impressive. This flick had me on the edge of my seat throughout all 9 Episodes. Also, say what you want of the show airing episodes weekly instead of all at once, but it made it so much better and helped me digest the content and be excited for 2 months straight. So, lets get into it.

Like normal, this critique will be based on three categories: Story, Acting, and Overall. Oh and as always, SPOILERS ARE AHEAD…

Story: 10/10
You see it correctly, the story is a 10 out of 10. Now this is rare, but this limited series really deserves it as it went above and beyond. The story is in a nutshell, Wanda explodes in an emotional sadness, taking over a town called Westview, which created a border or “Hex” while controlling everyone in the town as well as creating Wanda’s Vision…of Vision. The first 3 episodes, we get Wanda and Vision playing in multiple style sitcoms influenced by The Dick Van Dyke Show, I Love Lucy, Bewitched, Mary Tyler Moore, and The Brady Bunch. Something that really made the show impressive and feel like a sitcom was Episode 1 was filmed in front of a live studio audience. As these episodes unfold, we see little things that are “off” which makes us wonder what in the world is going on. We see Wanda being called through a random radio, Vision is wondering why his coworkers are acting strange, we see colored object when everything else is black and white, and Wanda vanishes a person coming out of a sewer with a beekeeper suit, reversing space and time! All these events lead up to the rush of Episode 4 where for the first time we feel the effects of the Post-Snap from Infinity Wars/End Game. Monica Rambeau is introduced and her boss is non other than Director Tyler Hayward, who leads SWORD. Monica goes out into the field right away being a tough person and we get to Jimmy Woo come back (who is comedy in this show). Monica and Jimmy meet outside of Westview, where everyone has vanished. Monica reaches out her hand and gets sucked into the Hex. After this, she gets spit back out which brings us in a complete circle of the events occurring in the Hex before, during, and after Monica is shot out. From there, the next 5 episodes show Vision gaining consciousness of the Hex and confronts Wanda, we see Wanda slowly losing her grasp and grip of her life within the Hex, and obviously Agnes eventually reveals herself as Agatha Harkness and throws Wanda for a loop. All of this is happening while SWORD rebuilds Vision as a lifeless being that is set to take down our hero’s. The story stays enticing and keeps you on the edge each episode with no dull moments. The final episode also gets right into it with Wanda facing Agatha, Visions fighting himself, and Monica trying to help out any way she can. All I can say is that the storytelling was “show not tell” at its finest and kept you guessing the whole time.

Acting: 11/10
The acting in this is over the top. The reason I overrated the score is because how different the show was throughout each episode. They wanted to make the show as authentic as possible especially when it came down to mimicking real life sitcoms, so the actors had to change their persona literally throughout the entire 9 episodes. Anywhere from acting as a 50’s sitcom cast to people realizing and begging Wanda to let them hold their own children. Elizabeth Olsen does a fantastic job playing so many different roles and adapting to working with so many characters in the show. It was also her first time doing sitcom acting and she killed it. Along side of her was Paul Bettany, who also took the live studio stage for the first time and had a lot of fun with it. He also jokingly said at one point he is looking forward to working with an actor he has always wanted to work with, which turned out to be himself as White Vision. His two roles played simultaneously was awesome and Paul did a very good job expressing emotions has two different visions. Kathryn Hahn, as Agatha Harkness, usually plays a lighter and more comedic role in her career. However, she was very excited to play this role especially finding out she is a witch and nailed it! Going from a nosy neighbor to an all out antagonist witch of the story was amazing to see and the transition was flawless. The rest of the cast no matter how big or small the role, also did an outstanding job and the world was so real and believable.

Overall: 10/10
This show honestly blew me away. The story behind it also makes me have goosebumps. The fact that they shot infract of a live audience for the first episode and used so many variants of lenses and camera equipment to capture the 50’s all the way to Modern Family was beyond my exceptions. Also this show was supposed to come after Black Widow, The Falcon and The Winter Soldier, Eternals, and Shang-Chi, but we got it as the first intro to Phase 4 of the MCU and it could not have gone any better. I think having the one year break from Marvel and letting us absorb the snap and people lives, really made this show hit the home run as well. I would recommend this show to anyone that has never picked up a comic book to the all out nerds that analyze each episode for hours looking for Easter eggs. This show was never expected to be this good and blew all expectations into the multiverse. Going from a show like Agents of Shield, and seeing what the new shows and future hold puts a huge smile in my face. Great way to start a new year of Marvel and getting back to a normal life! Hope you all enjoyed WandaVision as much as I did and this review helps a little. See you guys next time!