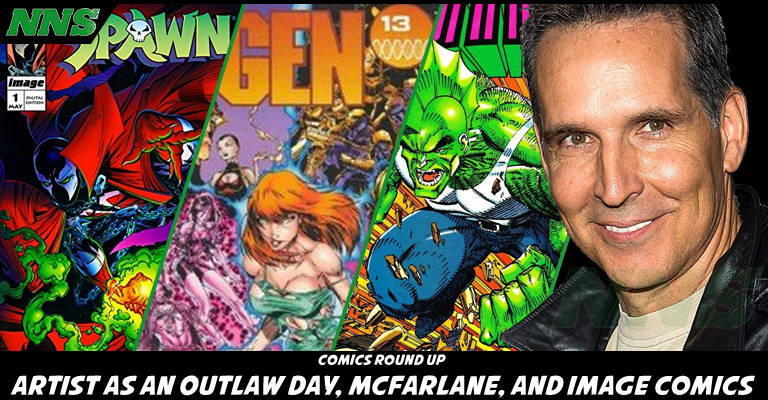 Today is “Artist as Outlaw Day” which is annually celebrated on January 19. While this is primarily a day dedicated to people like Banksy and the like of guerrilla art creators, the general idea is people who challenge the status quo and speak truth to power in the face of adversity. I don’t think that type of art is simply in the form of street art or sculptures. When applied to comic books one specific artist comes to my mind because of my love of his work, and that’s Todd McFarlane.

In 2018 Todd himself said he left Marvel ultimately because they were stifling his creativity, and the removal of the brutal scene of Shatterstar’s sword slicing into Juggernaut’s eye (…in Spider-Man #16) was the straw that broke the camel’s back. The fabled panel had come out to audiences in November of 1991.

While, in the past, Marvel had given him some control over the “Spider-Man” comic that he started for them, things were changing. Originally this new series and the ability to try his hand at writing stories was the only reason he stayed at Marvel, they had started to take back control in various ways, and this was just not how he wanted to create.

Just a year prior big names in comics like Erik Larsen, Rob Liefeld, and Jim Valentino had already been talking about creating a space where creators could actually own their own work, instead of the traditional landscape of comics at the time.

At Marvel Comics, many artists were upset that creators weren’t properly compensated, and that the company was able to overly merchandise their work, while only giving the creator of those works a tiny cut of the profits. If you created a hero at Marvel, or even DC in those days the character belonged to the publishing company and royalties was all the artist got. This wasn’t specifically the reason, but not.. not the reason, that McFarlane wanted to leave Marvel. He wanted a place where he could create, and no one would shut him down or censor his ideas.

Todd McFarlane, Jim Lee, Rob Liefeld, Jim Valentino, Erik Larsen, Marc Silvestri, and Whilce Portacio left their respective publishers to enter into this new company structure under Image Comics. The company had only two primary concepts. Creators would have their own studios and publish under Image, while they retained complete ownership of their creations, and no partner could control another partner’s work.

While what Image strove to create was unheard of at the time, it changed the idea of what a creator could do, and lead to a lot of great creators having the guts to create more independent series so that they can completely own their creations. I wish I could say that it changed the techniques and practices of the big shots and large publishers, but I can’t. Still to this day, Marvel has issues with respecting their creators, they even recently sued the heirs of their most famous creators, in an attempt to hold onto the licenses and rights of their most popular characters.

The creation of Image led to the existance of some of my favorite characters and series. Here are a few:

However, while these are the primary comics that stand out due to being the main founding partner’s titles, the company continued on to create venues that lead to other amazing series like The Maxx from Sam Kieth, Bone from Jeff Smith, and Astro City from Kurt Busiek, Brent Anderson, and Alex Ross.

All because a bunch of creators, including Todd McFarlane, wanted to create a better and more creator-friendly company to challenge the big shot producers that were crushing their creatives.