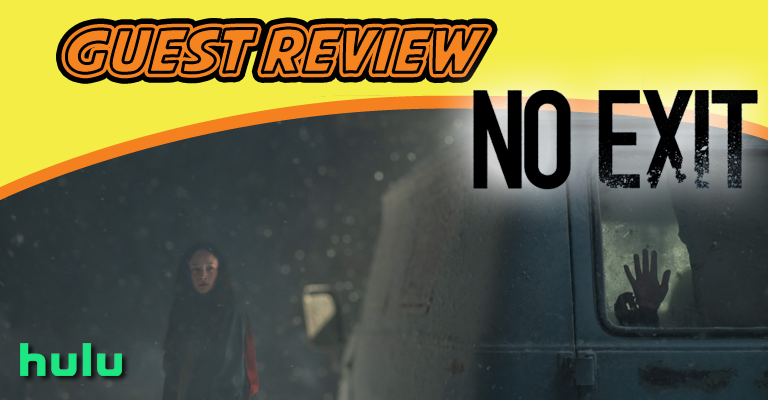 ‘No Exit’ has finally arrived on HULU, and I am beyond excited to walk you through exactly why I think this movie kicks some serious ass, and deserves to be watched.

The film is actually an adaptation of a novel written by Taylor Adams. Directed by Damien Power, this powerful thriller introduces you to Darby (Havana Rose Liu) a young girl battling with opioid addiction who escapes her rehab facility after finding out that her mother has been rushed into hospital with a medical emergency. On her long drive home she encounters some treacherous weather that forces her off the road, into a nearby welcome center where some other unfortunate travelers are cooped up. Things go from bad to worse when Darby discovers that one of these strangers has kidnapped a little girl in their vehicle. It’s a life or death situation as Darby attempts to uncover the truth about these strangers to save a little girl’s life.

This very small cast of Liu, Danny Ramirez, David Rysdahl, Dale Dickey, and Dennis Haysbert came together to create an incredibly tense story that you feel every second of the film. The cast has literally nowhere to hide with their performances, given the story’s landlocked plot that is centered around one building and a parking lot over the span of one evening. Which places a lot more emphasis on the actors really bringing their A games to the character’s roles.

Liu especially was fantastic to behold as she serves as the film’s focal perspective, but coming from the background of an addict she’s a completely unreliable narrator with compromised judgment. Liu does a wonderful job in capturing the essence of Darby, as this raw, damaged young woman that is completely dependent on her addictive urges, but has been placed in this situation where she is forced to act in order to save an innocent girl in an unforgiving situation.

I mean in that situation how would any of us realistically handle that kind of pressure? I can tell you dear reader, that I would buckle quicker than a wet cardboard box. Which is what makes Liu’s interpretation of Darby such an engaging watch, and again Liu really sells the hell out of this role.

I want to speak more about the rest of the cast, but in doing so I believe it shines too much light on what is an impressive story that deserves to be seen first, and discussed second. So what I will say instead, was that second to Liu, Ramirez was the next actor who deserves a lot of attention. I’d love to see the two of these young actors in more films like this as they’ve demonstrated they’re both more than capable of transforming into what is needed for the story.

Speaking of unforgiving, the choices of how to highlight the suspense in this film were superb. Chief amongst those were the use of audio stimulants, with the best example being the howling gusts of wind. It created this terrifying ambiance of danger, and suspicion, and the way the wind interacted with the building itself almost felt like an attack as the walls creaked, and groaned under the pressure. The sound created was a constant reminder that all that stood between these people and the chilling elements were a few thin walls.

This metaphor only serves to reinforce the very real danger that Darby is facing as she attempts to pretend she is momentarily safe amongst the majority of these strangers all the while knowing very well that one of them is a dangerous criminal.

My only real critique of the film was that it gave away some bigger elements of story quite early, and I would have loved to have seen Power and his crew really clamp down and tease out that psychological aspect a little longer. That being said, I think the direction in the long run still works, and that third act was utter craziness.

‘No Exit’ is not a film I expected to be walking away from with such high impressions, but it’s clear that Damien Power, and his power cast came to play. Havana Rose Liu, and Danny Ramirez both clocked in with some fantastic performances that will leave you with your jaw in your lap. The ending for this film is something else folks, I can’t wait for you all to watch it.

‘No Exit’ is available now, exclusively on HULU.