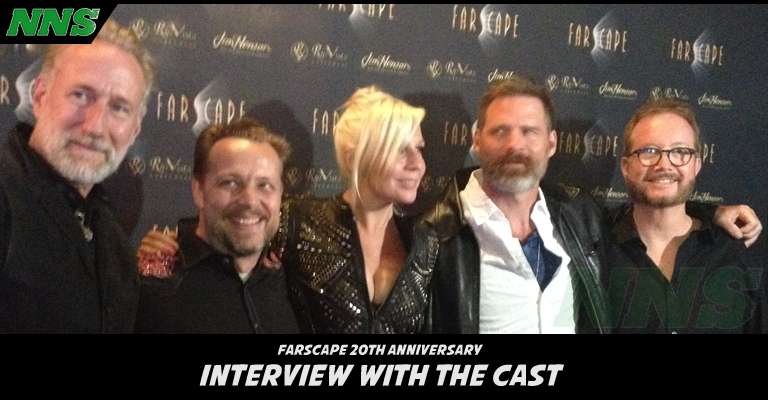 As we get ready for the amazing 20th Anniversary Party tomorrow at the Jim Henson Studio, we thought it would be a great idea to reach out to some of the people who will be at the party, and more specifically are what made Farscape amazing.

We got a hold of the incredibly skilled, talented, and busy Rockne S. O’Bannon, the creator of Farscape, as well as Defiance, Cult, Alien Nation, and seaQuest DSV. Having been the creator of the show, we really wanted to know his favorite parts of Farscape, and what the support from fans means to him!

Jeremiah Jones: What was your favorite episode or scene?

Rockne S. O’Bannon: I’d much rather answer my favorite scene in each episode! It’s hard to pick a favorite episode or scene. My favorite episode may be The Way We Weren’t in the second season. I loved how we discovered something remarkable about both Aeryn and Pilot, very emotional and a little dark — two of Farscape’s best features. My favorite scene is obviously a much harder question. But I’ll go with the scene that popped immediately to mind, and that’s the scene near the end of the first season when Pilot tells Aeryn that Moya wants Aeryn to name her baby. The performance by Claudia Black in that scene is breathtaking and so very touching — yes, two more of Farscape’s features. And it spoke to the amazing distance that Aeryn had come from the Premiere episode, and how she was living up to Crichton’s words to her soon after they met, “You can be more.” Yep, love that scene.

Jeremiah: What did the fan support mean to you when it came to finishing the series with the peacekeeper wars, I.E. The petitions and demands?

Rockne: Fan support throughout the series meant everything to us. And the fact that it continued after we stopped producing episodes, and actually continues to this day, 20th Anniversary Party, baby!. It’s always a joy to meet up with and interact with everybody, and it’s not really a “fan” and “filmmaker” relationship, it’s really more like friends meeting up who share a common passion. It’s terrific to see so many of the same faces through the years, but it’s also so gratifying to get a chance to spend time chatting with new folks who’ve discovered the show so long since it began.

Jeremiah: What would you like to say to the old fans and those who are new to Farscape?

Rockne: As Brian Henson and I have made clear recently, we’ve made it our mission to see how and where we can best bring us all back into the Uncharted Territories. I, for one, am dying to know what’s been going on there, and what these characters have all been up to. The best thing fans can do is watch the original episodes currently airing on Amazon Prime, be sure to give it high scores, and to get as many friends to watch, too — not only friends but family and strangers and old flames you really don’t want to talk to again but you know they’ll take your call.

Next person we talked to was the amazing and talented Gigi Edgley, known by most fans as Chiana, will be at the event tomorrow, and will even be performing.

Jeremiah: What is your favorite behind the scenes moment?

Gigi Edgley: My favorite behind the scenes moment is the first time that I walked onto Moya….and then it’s every moment on set after that. The writing, make up, directing, stellar actors, prosthetics, sets, costumes…the list goes on… were all so phenomenal. I loved every microt of our wild adventure through the uncharted territories together.

Jeremiah: Chiana always had almost random movements that added to her character, was that scripted or more your choice?

Gigi: It was my choice. I didn’t want to be a human in alien make up. I wanted to be an alien. I had seen many Henson productions growing up. All the characters in the Jim Henson Company Universe are so unbelievably believable. So I wanted to discover a creature that fit seamlessly into that world. It’s very rare that you get to play a species that doesn’t exist on Earth so I adored finding movements and nuances that made her come to life.

Jeremiah: What did the fan support mean to you when it came to finishing the series with the peacekeeper wars, I.E. The petitions and demands?

Gigi: The fans rock! I was over the moon when we were told that Farscape was happening again! I am so grateful to the wonderful fans out there that made it happen. Now it’s been released on Amazon Prime again…and it’s the 20th anniversary…I believe we’re due to bring the crew back together again to continue the epic Farscape Legacy! Frell yeah!

We also got the chance to ask Francesa Buller, known for playing M’Lee, Rona, Raxil, and War Minister Ahkna on the series. As one of the actors who had to wear some of the most intense prosthetic costumes, we wanted to know how it affected her while acting.

Jeremiah: Did the costume and prosthetics limit your movement and how did you use that to character’s advantage?

Francesa Buller: Firstly the costume helped me find the character tremendously. The costume is a gift in so many ways.

For M’Lee I thought the spikes coming out of her flesh would be painful-she’s young, an animal species and still not fully formed-so I used to that to my advantage making it seem pretty horrendous for her, like when she is in the cockpit with D’Argo. and she is in obvious pain trying to fight the transition. There was something so vulnerable about her and I felt that as the costume was so exposed. Nothing to hide.

Rona was dressed so very plainly in the first episode -very character less-there was nothing on her that informed the audience as to who she was, and I liked that because for me it meant she was somebody who was a non entity, just existing yet not to be noticed. I could plot quietly away and nobody thought about me or my intention at all. However she studied people and situations intently in a slow methodical manner for her own advantage.

But at the same time she was very neat ( I had a geisha connection going on in my mind) and took great pride I think in being so fastidious. So when later on in her storyline, in 2.12 when she is on the ship with Braca and Crichton and she is in a new “going away” outfit, she is beginning to unravel mentally because the situation is totally out of her control with the explosions and chaos.

I think she was badly missing her first Palace costume of 2.11 and its security. I liked to think she strayed too far from her roots and it was her down fall, she did not stick to her lane.

Raxil was a fixer and the costume was super light compared to M’Lee, and that meant I could move and dodge and weave. I had the sensation that Raxil was always five steps ahead both physically and mentally from everybody else-she had to be-in order to survive. There was a “Ratso Rizzo” quality there and she was pitched to me by David Kemper as a “Joe Pesci” type so she was very energetic. Fast in dialogue, fast in movement.

Loved the sleekness of her.

And War Minister Ahkna was a very very feminine compared to the other aliens I played. That was deliberate on Lou Elsey’s part as we both wanted this character to be a female powerhouse. You can see that in the gorgeous boots that went on forever, which meant I could stride forward taking full control of the landscape as much as I could. The corset was showing off her waist; the sexy black sleekness of her skirt reminded me of a tango dancer as it moved and the hat echoed the indomitable aspect of her character. Fantastic costume. Later on in the mini series when Ahkna felt frustrated -when things were not going her way, her shoulders slump a little and I wanted to portray as being slightly burdened and “earth bound” by her outfit. She never relaxes. She is tightly bound with tension and ambition.

Jeremiah: Playing a villain can be difficult, did the anonymity of the prosthetics make it easier?

Francesa: In answer to your question, no. I did not feel anonymous. Wearing prosthetics is a challenge both physically and mentally, but I think the make up also informs the actor, and is another way ‘in”. I did not think the prosthetics were anonymous; there were many clues for me in the make up in regards to character. Those brutal cheekbones of Ahkna tells you something! The colorfulness of Raxil’s make up suggests a playfulness, a prettiness, something beguiling for the observer to observe. The young horns on M’Lee not fully formed, but still animalistic, still very strange.

Honestly I don’t think easiness came into play here at all; especially with an audience so smart and super knowledgeable about the world of “Farscape”.

You had to “up your game” tremendously because we all knew how passionate the fan base was and it was such an incredible series to be a part of; mystery and deception was all part of its strength.

Jeremiah: Which was your favorite character to play in the series, and why?

Francesa: I loved Raxil; she was a rollercoaster ride in many ways and I loved the episode because of the wonderful director Tony Tilse, and getting to play so much with Anthony Simcoe and Ben. Raxil was a joy because in that cesspool environment there was something very noble about her as if she was aware of the importance of “tribes” and finding Jools and Chiana for Crichton and D’Argo. Yet at the same time when she gets the all important piece to the milking machine at the end of the episode, we are left with the idea she will continue leeching on people and profiting by them, so essentially she has not learnt a thing!

You can still purchase tickets for this event, to see the stars in person, Here, but hurry up as the event is tomorrow!

Want to see our prior coverage of the anniversary of Farscape?