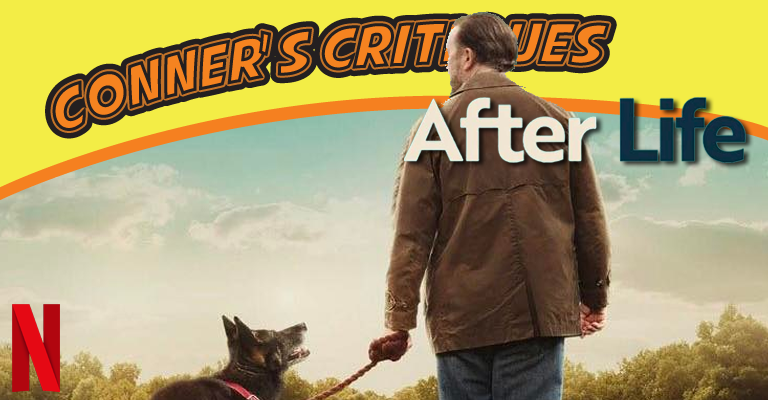 We’ve watched all 3 seasons of after life, the Ricky Gervais project from Netflix that specifically deals with grief in a realistic, modern, and painful way. Be warned, this is a dark yet impressive story.

So as we’ve watched the whole series, we’re happy to come back and talk about the show as a whole. As always, though, we break down our reviews into three categories: story, acting, and overall.

Let’s jump into it.

The story of After Life, is about Tony, who has just lost his wife Lisa. It’s rough and her passing left a lot of pain in his life, but the world keeps moving around him. Unfortunately Tony doesn’t want to keep moving. He’s done.

Tony and Lisa lived for one another and were perfect together, there’s no one else that could ever replace her in his mind. All he does is suffer because of it. Before Lisa’s death, Tony might have been a snarky fellow, but he was full of so much love and adoration for everyone around him. Constantly giving attention and affection to those he deemed worth it.

After she dies though, he spends all his life in his house drinking alcohol and barely existing in the world around him. His only escape from his drinking and sorrow is the small moments working for his brother-in-law’s local newspaper, focusing on human interest pieces.

As he travels through his own grief, guilt, and the idea of what’s next, we get to see and meet so many unique and colorful characters within the world of After Life. He meets and interacts with a woman who is also morning her husband who passed away years before, through this connection he is able to find some familiarity. Outside of that his only other relationship is with his long term friendship with Lenny, his photographer, who does his best to suffer at the side of his hurting friend.

As the show continues on we’re treated to a journey to recovery, slow progression, and moments of compassion and hope that will tug at your heart strings. The journey may be bumpy and you might require a couple tissues for the tears along the way, but there’s no argument about the beauty that is the story told in After Life.

Ricky Gervais, who plays Tony, is a very unique person, who normally plays in comedies. His rude and aggressive comedy stylings can rub some people the wrong way, but he clearly has shown his ability to act. No one can watch After Life, walk away, and say Ricky Gervais is funny but he can’t act. Sure we get a lot of scenes with a snarky Gervais, but we get just as many showing a man lost in grief, hanging onto the happy moments of a marriage now gone. The series follows a man mourning moments taken from him too soon.

The supporting roles around the newspaper office by Tom Basden, Tony Way, and Diane Morgan all do a great job working through the frustration of people who are allowing Gervais’s character the time to get through his trauma, with the hope that he will find some peace.

Another amazing acting job is done by Ashley Jensen, who plays Emma, a nurse that at one point cares for Tony’s father. It’s heartbreaking her journey through the show, as she goes from a potential love interest, to friend to a woman pining over a man who’ll never be ready for her. However, the show is honest to itself allowing the characters to not simply grow and change because it would make for fun viewing to the audience, It stays true to the the characters and who they are. Tony will never want another wife, another girlfriend, another woman in his life to replace Lisa. That’s never going to happen. I’m glad a shift in character doesn’t cheapen out the story by forcing a romance for him.

If you’re looking for some light hearted comedy, then this story is not for you. But if you’re willing to endure a fair amount of drama, a little bit of dry British humor mixed in, with a lot of sardonic Ricky Gervais one liners, then you’ll be in for a wild ride of your emotions.

As far as shows go, I think high praise is owed to shows that you walk out of the end, feeling hopeful not just for the characters of the show, but for yourself. After Life does a great job at making you feel hopeful when all is said and done.