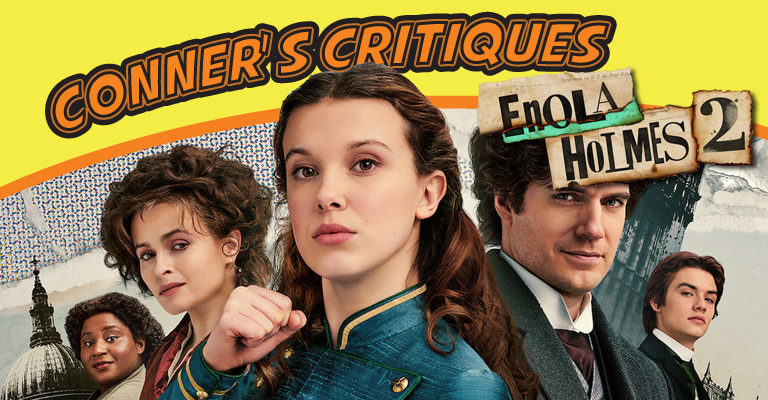 While I was originally worried that Enola Holmes’ future movies would never see the light of day due to the lawsuits, I’m glad to see that was not the case! Netflix continued on and a second film in the story has been released!

As you may know by now, Enola Holmes was a fun female led novel series dedicated to the fictional sister of literary legend Sherlock Holmes. The story however, instead of focusing on Sherlock, tells of Enola and her similar skills but interestingly different takes to similar situations.

We’ve previously reviewed the first movie, you can actually see our review for that Here. Now, however, it’s time to jump into the second film in the series, and as always we break our reviews down to the categories of story, acting, and overall.

So let’s jump right into it!

The series is supposedly right after the events of the first film, but everyone is so much older now! Enola is excited about her prior successful case and has used the momentum to convince herself to start up her own detective agency in London. Unfortunately her age and gender prevents problems for her “would be” clients, that simply would prefer her older brother was handling their cases. While she tries her best, the doors to her agency are forced to be shuttered.

Right before she is able to close for good though, a young matchstick girl approaches her with a case. The girl needs Enola to investigate her surrogate sister who has gone missing.

Now Enola is forced to engage with and travel through many societal circles that she is unfortunately not prepared for, all while the police and her own brother are right on her tail.

The story is interesting, tragic, and at times fun. It’s amazing to see the movie bring back the great and amazing Helena Bonham Carter. There is a lot of love in her representation of the role, and the story even cuts deep into the childhood of the three Holmes children.

”If you are looking for a fun story with a mystery twist, then you’ll love this movie’s use of the lore in the world of Sherlock Holmes.”

The story is interesting and engaging. If you are looking for a fun story with a mystery twist, then you’ll love this movie’s use of the lore in the world of Sherlock Holmes.

I’ll be honest, while Millie Bobby Brown does a fun job performing as Enola Holmes, the whole series comes off feeling a bit more like a late 80s sitcom with the main character talking to the audience. In the first film they were fun asides but for some reason the performance by Brown came off a bit more saccharine.

Additionally while we loved the raw charisma of Henry Cavill in this film it felt that they didn’t know what to do with him at first and they didn’t earn his need for a friend through this movie. They could have done a much better job setting that up.

Aside from that Susan Wokoma and Helena Bonhan Carter are amazing together and have wonderful chemistry.

I know this series is capable of a lot more then what it is providing. That doesn’t mean that the movie wasn’t interesting and fun, it’s just that I want to see it grow. I hope that they get the chance to raise the grade and produce a little bit better of individual character development in another film.

I really love this series. I like the inclusion of a female lead. Brown and Cavill have a great energy together in their scenes, and the inclusion of actual historical events into their stories creates almost a fun history lesson.

The lawsuit has been settled, so hopefully we can get a couple more movies before Brown ages out of the role.