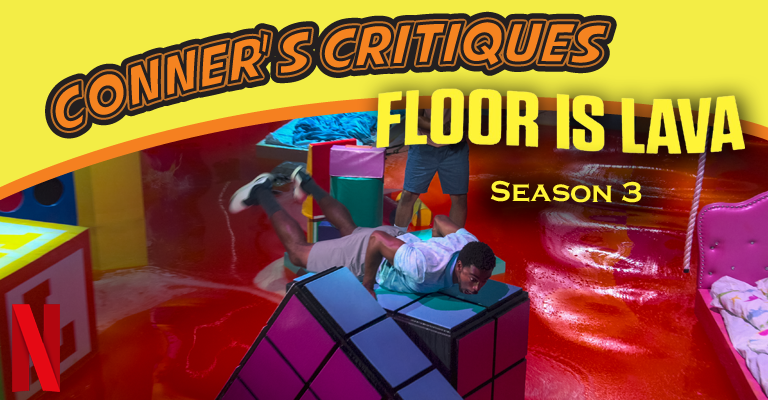 We’ve reviewed the Floor Is Lava before, but now it’s time for the third season. As always we will review the series by the categories of story, acting, and overall. We’re unfortunately going to have to change some of our categories slightly though as this is a game/reality show.

What are we waiting for? Let’s jump in!

Instead of talking about the traditional concept of story, we’ll talk about the format at which the show takes through its competition. The first season of the show was a very interesting take on the premise of the “floor is lava,” turning it into a game show similar to Double Dare, or Forbidden Temple.

The second season of the series however was very interesting as it took it up a notch, and turned the experience into more of a multi-tiered challenge. We even previously commended the series for its change.

The second season was only five episodes though, which was weird. I thought that that would lead to a release of more episodes later on, but they then instead decided to release this season’s five episodes as “season three.” However, since there’s no actual change to the dynamics of the show it makes me wonder if they filmed all 10 episodes together and then decided to split the 10, creating an artificial third season.

“No new obstacles, no new final challenge, and no change to the format. However, if you still like the second season, at least you won’t be disappointed.”

There is no change to the format, no growth or development of the series. There really is no difference whatsoever. No new obstacles, no new final challenge, and no change to the format. However, if you still like the second season, at least you won’t be disappointed. That being said, I can’t give it a lot of positive marks for creativity as the series does nothing to improve the format.

For this category, instead of talking about acting, since it’s a game show, we are going to talk more about the contestants that ran through the gauntlet of the season. There were a lot of characters on the show this season, people whose personalities are definitely likable, I’m looking at you Latin Heat. There were also people you just can’t stand like Karine from LA Jitterbugs. She just stood there and did nothing!

The only big stand for the season though was the inclusion of Best Friends (Chuck Taylor, Kris Statlander, and Orange Cassidy), the professional wrestlers from AEW!

While I was shocked by their performance in the contest, you couldn’t argue with the charming personalities the group brought to the episode.

Honestly, after the large jump that they made from season one to season two with regards to the production quality and dynamics of the series, I was expecting a lot more from the third season.

It still after everything feels like a cheated “third season.”

There’s no harm in keeping a series or game show exactly the same. It creates a sense of normalcy for the viewers. However, when you create a show that has entirely new mazes between the first and second season, there’s almost an expectation that there will be different mazes and concepts in the next season. Something new that the contestants can’t have seen prior in the series to prepare for. We’ll have to wait and see if there’s a fourth season. See if there are new mazes, or if it’s just going to be the same game over and over and over again.