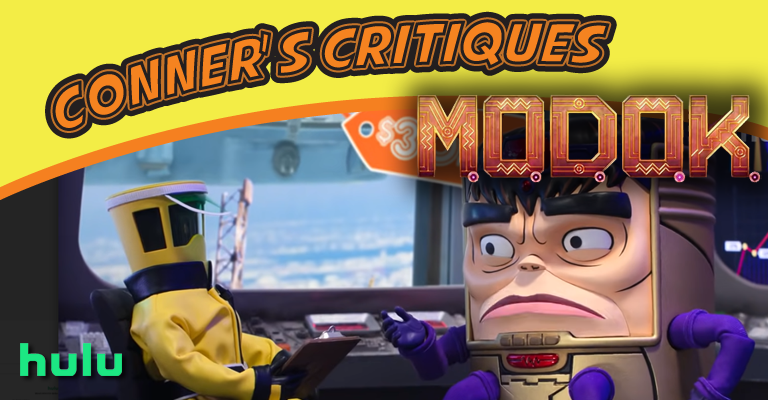 Marvel is such a heavy hitter, and since Disney took over it only gets larger. With the massive bankroll, and their willingness to take a chance we get awesome projects like “What If?” and more importantly, Modok. Modok is a character in the Marvel world that usually delights people in his arrival. Be it from a comic book cameo to showing up in the Marvel’s Ultimate Alliance Video game.

We got an early chance to screen the entire series, and we are more than happy to jump into it for you. We promise to keep spoilers and major plot points a secret, but we can’t help spoiling a little bit of the format. However, if you saw the trailer, it’s already “cat out of the bag.”

That being said, let’s jump into the critique and as always base it on three categories: Story, Acting, and Overall.

STORY: 7/10
While it may seem a bit weird to empathize with a villain, who honestly does almost always bad things, the show overcomes that hurdle by focusing on his underlying love of his family, even though he is inept at properly caring for them, or showing how he feels.

The show also does an amazing job incorporating the world of Marvel, including characters and story nods that we just wish that the MCU would incorporate already! To be fair though, it’s what we have come to expect from production company Stoopid Buddy Stoodios who have produced nods to geek culture via their work on Robot Chicken.

ACTING: 8/10
Patton Oswald kills it as the lead Modok. He beautifully showcases an intentionally whiney tone of a man who has never had to work very hard in his life due to his superior intelligence. When his life is turned upside down, primarily by the difficulties of raising a family, we get to see him flounder as he tries to regain the footing appropriately for a man of his… stature?

Speaking of his family Aimee Garcia, Melissa Fumero, and Ben Schwartz are loud almost comic-book-esc representations of a real family. Their baggage and issues within the series round out a family-based show, with superhero undertones in a fun and cartoonish, but almost believable way.

Beck Bennett and Wendi McLendon-Covey do an amazing job, in different ways, hilariously playing the main foil for Modok to overcome. Hell, even Nathan Fillion is beautifully cast as Wonder Man, which feels like a subtle nod at his character of Captain Hammer, but less of a jerk.

Also, because I feel bad not saying his name due to his hard work on the series. Jon Daly. There I said it.

OVERALL: 7/10
It’s a great show for older kids, and nerdy older viewers to watch together. It’s a little out there with some of it’s themes for super young children, while also being a bit too outlandish for adults un-educated in comic book series. That being said, if you have an adult friend a little outside of the realm of Marvel, they’ll likely still be able to laugh at the situations throughout. I mean… everything Murphys.

Conner’s Final Thought(s):
Unlike the Robot Chicken series where you jump around a lot through other IPs, this series focuses only on the world of Modok in the Marvel Universe, but there is so much to cover and include in it, as they do a really good job bringing in multiple b-list characters, and a couple of A-listers hidden throughout the series. If you are a huge fan of Marvel, you owe it to yourself to watch this fun series.