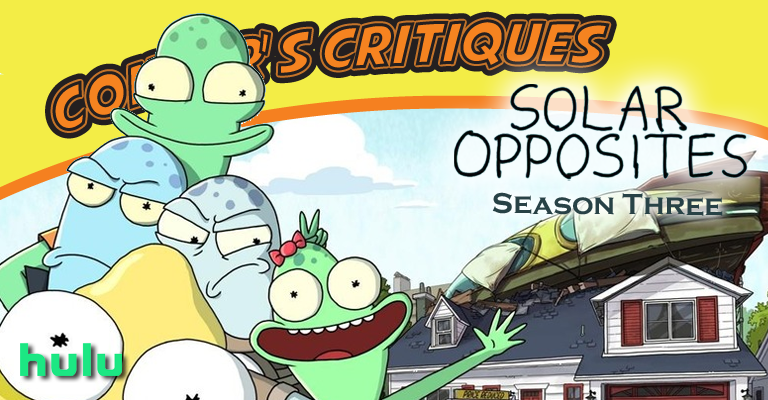 Justin Roiland’s adult animation series, Solar Opposites, has ben a major success over on Hulu. Clearly the man can print money in the world of adult animation. With season 3 of about to come out, we jumped at the chance to review the series ahead of it’s release!

As always our reviews are broken down into three categories story, acting, and overall. So let’s jump in, the Solar Opposites, season three, are being reviewed!

Solar Opposites storylines are usually stand alone entertainment with barely any connection between each episode. Sure there is a general premise that they are trying to get off of Earth throughout the seasons, but they don’t really need to connect episode to episode in viewing. This season, there was a massive deviation from that concept.

We start off the season, like we did in season two, with the Solar Opposites about to leave Earth, but issues, tragedy, and crew buffoonery leads to the ship not being able to take off.

The continued story of the first episode this season, unlike the prior seasons, creates a ripple effect in the main cast that continues through their actions the entire rest of the season. Characters even making choices that fundamentally change key factors about themselves.

A further showcase of the shows change from stand-alone episodes is that we have one episode this season that directly leads into another episode. Organizations are mentioned in one episode of the season, and then delved into in a much deeper way several episodes later. Usually this type of content within the series is limited to only events that occur in the “Wall.” And don’t worry the Wall story does return this season. How could it not.

It’s hard to say why Justin Roiland chose to change this formatting this season. Was it due to the success of delving deeper into the lore of Rick and Morty, who can tell. Whatever the reason I’m in love with the change. Solar Opposites feels better for it, and it gives more weight to all the episodes this season.

Characters this season showcase incredibly subtle changes that have long standing consequences, as explained earlier in the story section. The cast does a great job going through these arcs. To address the Wall story, it goes deeper and more interesting as they venture back into the under-levels. They even bring back some of the earlier and classic characters from the wall.

This season goes hard. It’s unafraid to go extreme with its stories, B-stories, and the depths at which the Solar Opposites will go to achieve their goals. The Pupa story is incredibly interesting, and this season makes all prior adventures from Pupa look like walks in the park. He doesn’t care whose life he destroys to get what he wants.

“If you liked the off-the-wall comedy of Solar Opposites’s past seasons, it’s amplified into a much more concentrated form this season.”

This is definitely not a good starting point to enter into the world of Solar Opposites. The extreme levels of crazy, and how much they increased the antics of the characters definitely makes a great third season, but if you haven’t watched any episodes before, I highly recommend you check out the first and second season before watching the third season. If you want to check out our prior Critiques you can see our review of season one Here and season two Here.