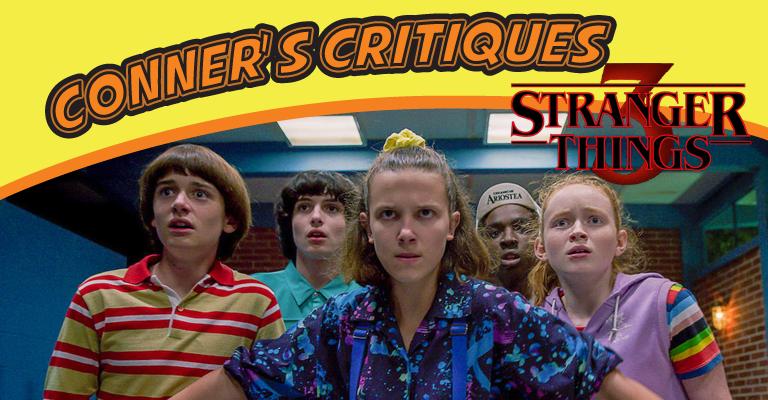 Another season of Stranger Things came, and I watched it all, so I could give you our thoughts. As for advertising though, Netflix hit hard on making sure everyone knew that this show existed, as if it was even a question. From setting up themed carnivals on the Santa Monica Pier, and Coney Island, to the re-release of New Coke and rebranding of Basken Robbins as Scoops Ahoy, their ad game was on point!

If you haven’t seen the new season for the series, then get on it! We will be here waiting for you when you if you are worried about Spoilers, because, here there be some.

As always we break down the critiques of the three categories: Story, Acting, and Overall. So lets go upside down into this critique!

The one stand out from the trope of 80s movies, and more in the modern era, was the redemption story arc. I was watching the whole show, begging them to not make the villain of the season be redeemed in any way shape or form, and I was very disappointed by their refusal to listen to me. I will say however, I gave it a nod for making it at least a believable conclusion, and not making a rainbow ending.

ACTING: 9/10
Finn Wolfhard pissed me off all season. It wasn’t his fault, the writers decided to make Mike Wheeler a disrespectful piece of shit, with no respect for people who saved his own life, or the people he is supposedly committed to, abandoning who he was as a character from the prior season. When a child goes through a violent situation, without a support system they act like Mike did. With no stimuli, they become like Mike did. However, children who go through situations of violence, that are rescued, literally rescued idolize their heroes, not demonize them, like he did with Hopper.

All the other actors are killing it, and they are rocking their situation, while making the world grounded in some reality.

OVERALL: 8/10
It was a good season, it was engaging, as long as you can make it through the scenes of with Mike Wheeler, then you will enjoy the new season.

Also, why couldn’t Nancy once just listen to Jonathon. He was right almost the entire time, and she was just so upset and angry the whole time.

Conner’s Final Thought(s):
I like the season, they did a great job advertising it, and bringing unique opportunities to people to celebrate the new season. I will say however my only issue is they went all in with their conclusion, and the consequences of their battle with the upside down, and the red scare. It was dealt with so abruptly and treated as if it wasn’t even a question.

All in all though a good run!