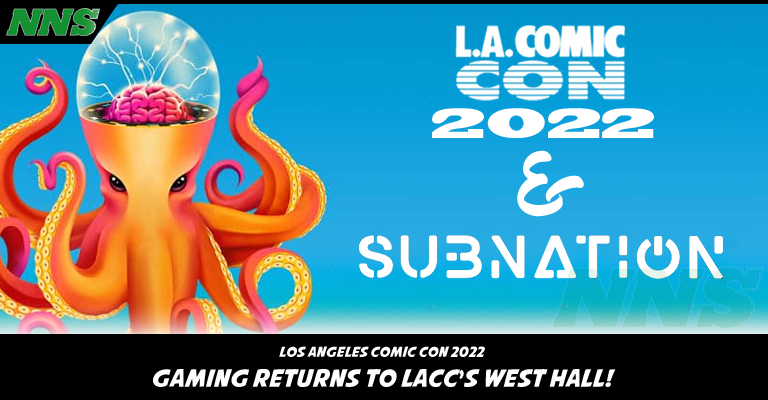 One of our favorite experiences that was new to last year’s Los Angeles Comic Con was the West Hall of the convention center. The experience in that section of the con was split with one section focused on gaming, with a gaming area, and large presentation area. The other section was dedicated to Anime and Voice Over talent, signings, photo ops, and workshops for their fans.

When Los Angeles Comic Con returns on December 2nd through the 4th, the unique experience of the west hall is back!

Los Angeles Comic Con has partnered with Subnation Media, a Gaming and Web3 venture studio, to create a unique experience of gaming, streaming, and anime to match if not exceed expectations caused by last year’s awesome performance.

The 147,000-square-foot West Hall be split into three zones, the Stream Studio, PC Freeplay area, and the Main Stage. The space will also once again feature appearances from gaming talent, the ability for attendees to check out streaming stations, freeplay, and even esports competitions!

We got the chance to connect once again to the CEO in charge of Los Angeles Comic Con, Chris DeMoulin.

Eric Bryan Seuthe II: As always it’s a pleasure to get the chance to talk to you about the great experience that you are bringing to the Los Angeles Convention Center for L.A. Comic Con this year.

Chris DeMoulin: Eric, so great to speak with you and the Nerd News Social team again! Just nine weeks to go until the big event!

Eric: The increase in the floorplan for Los Angeles Comic Con has netted the ability to host a large new space specializing in Anime and Gaming. Was there any specific reason you grouped the two categories together?

Chris: For about three years now, our fans have been asking us for more content and activations in two areas – Anime and Gaming. We started that expansion in December 2021, but now that we’ve partnered with Subnation Media as a producer, we can really exponentially expand the fun. There will not only be a main Gaming Stage with panels and celebrities, but also a Streaming Studio, a collegiate eSports tournament, a Freeplay area with 80-100 game stations, an Anime zone with celebrity signings and activations, and so much more. Gaming & Anime really complement our core comics, pop culture and entertainment content, and now both the traditional Con fans and the new gaming/anime fans can experience the entire Con for one price!

Eric: I know it’s still early, but you guys partnered with a major online name Jacksepticeye and his Thankmas fundraising. I know you likely can’t list any specific names as of yet, but are you planning a similar partnership this year?

Chris: Absolutely! We renewed and expanded our partnership with Tiltify and will be featuring a variety of ways that fans, exhibitors, artists and celebrities can contribute to this year’s efforts, which will benefit Jose Andres’ World Central Kitchen, which provides meals to those in need in the wake of natural disasters. In addition to being able to add a donation at the time fans buy their tickets, there will be a fun variety of show exclusives and activations onsite as well which will raise funds directly for the charity.

Eric: There is mention of esports competitions, but are there any specific planned companies or games that will be showcased at the convention?

Chris: Yes! The formal eSports competition will be a collegiate “League of Legends” tournament featuring 16 teams, with the Semi-Finals and Finals live onsite on the Gaming stage provided by LeagueSpot. There will also be a Freeplay area with 80-100 game stations featuring over a dozen games, and a Streaming Studio so that gamers and influencers can report on all the action to their followers.

The West Hall of Los Angeles Comic Con requires no additional ticket, outside the normal badge. Single passes are currently on sale for $35-$50, and 3-day passes are available for $95. Purchase your tickets for the event Here