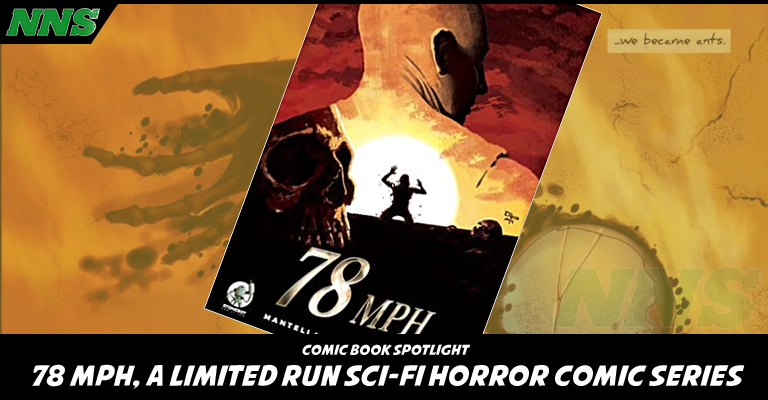 We got the chance to check out Red 5 Comics’ recent series called 78 MPH a sci-fi post-apocalyptic story about the destruction of humanity as we know it and the decent into a hellscape where the light of the sun is incredibly destructive.

So lets jump into this comic book series!

The story starts off talking about an effort to repair the ozone layer, and the results of it forcing the atmosphere to turn into a magnifying glass, cooking any bit of the world touching the light in an instant. The only saving grace for humanity was that in fear the nations launched their nukes to get revenge and forced the Earth’s rotation to be slowed.

The concept of story follows a couple issues, that the world’s rotations slowed to 78 miles per hour, and the world had built transcontinental highways that allowed the survivors to continue from land mass to land mass. Within the story, the characters deal with religious zealots, and a monster in the light immune to its heat and affects.

It’s an interesting story, but it does require a slight suspension of disbelief. There are issues like evolution, fuel consumption, transcontinental highways, and the ability to slow the Earth’s rotations that can make it hard to believe.

That being said, the story is subtle, and I wasn’t prepared for the twist, so it was an interesting comic to read.

I have to warn though, there are several issues and content references to the subject of sexual assault. However, nothing is specifically shown, it does get close in one scene. If that is too much to deal with, then I highly recommend that you skip this one.

You can pick up the complete collection Here!