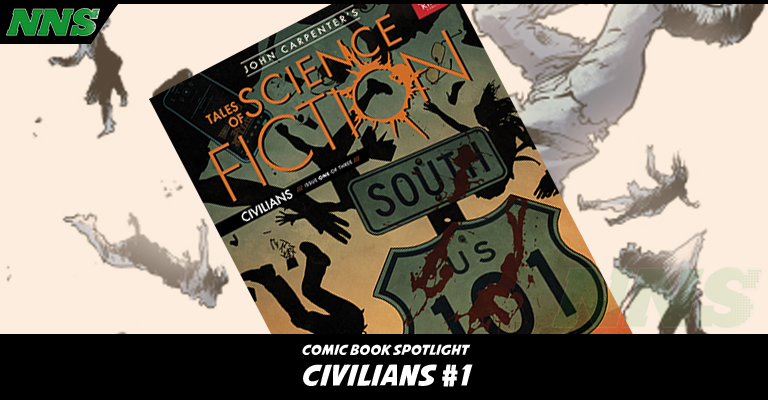 Once again we are reviewing a comic book from the great company that is storm king productions. This company focuses a lot on horror theme comic books, as well as high-concept sci-fi stories.

This review is focusing on the first issue of their new series called Civilians!

The story picks up with a cataclysmic event where a bunch of people walks into the ocean drowning themselves. What follows is the world’s reaction to such an event followed by another event and another.

While the other shoe hasn’t dropped yet to explain why these events are happening within this work, there’s been some talk within the story of junk DNA and a connection between all human beings. What I can specifically say about the story, is it does a really good job not just showing the horrible events that leads to many losses of lives but also does a good job showing the aftermath of these events in people’s reactions. All be it in small segments.

It’s very interesting to see this side of a story. A lot of the time, when dealing with horror or sci-fi stories, you don’t get to see the effects or the long-term repercussions upon society. It reminds me a lot of a show called Fringe.

In that show, the episode just started off with an event that led to the death of many people. The deaths however were just quickly glossed over, as if it was just something that happened, as they discussed the science and tech behind the attack. This comic book spends a lot more time dedicated to actually seeing the events from the people in the world around it as well as those closest to the people lost from them.

It’s an interesting concept, and I’m excited to see where the story goes from this point forward. Will We be seeing more information about what’s causing them, will the story focus on the main character who fights against it, or will the book, true to its title, focus more on the civilians who are unfortunately caught up in the horrors of these events.

You can pick up the issue Here or the whole collection in one paperback via pre-order Here, releasing in July 2022!