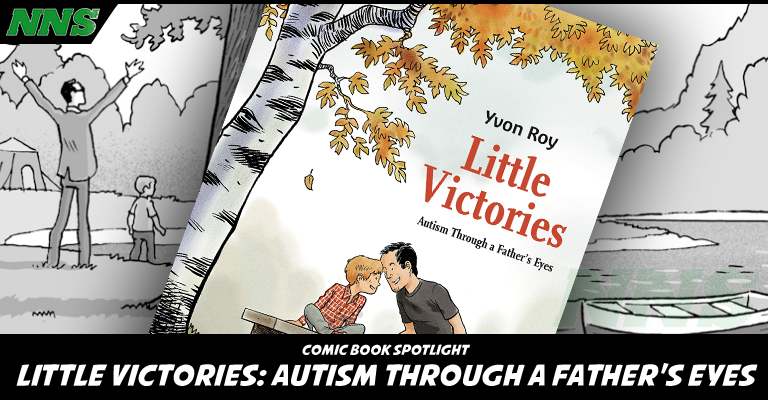 A lot of parents these days are supporting children with special needs specifically on the spectrum of autism. A couple of years ago I myself probably would not have discussed this topic, for fear of making comments that would be considered insensitive. If not insensitive I frankly would have felt slightly out of place within the discussion. I would have felt that I had not earned the right to have an opinion in the field.

But unfortunately, the world constantly is changing, now I am enduring my own journey through this world. While working with comic companies I stumbled upon the comic book Little Victories: Autism Through a Father’s Eyes by Yvon Roy.

My new connection to the world of special needs has led me to have a brand new opinion, what with having first-hand experience. It’s for that reason I decided specifically to cover this comic.

In the story, we deal with a husband and wife, but primarily focus on the husband’s point of view. This makes sense because the husband is actually the crater of the story that we are reading. During his child’s youth, he and his wife discover that there is something off about the way that their child is reacting to stimulation in his environment.

After seeking professional and medical help, they discover that their son is on the autism spectrum. Within this part of the book, I felt the most connected to the subject matter. There is a moment in which the husband is dealing with his personal feelings, that is so honest and unabridged.

His feelings, and the way he reacts to them, cause a falling out between himself and his wife. The story then moves on and he is now a single father sharing custody of his child. We see him refusing to give up or allow his child’s diagnosis to prevent him from giving his son the best childhood and skill set that he possibly can.

It’s hard to say if we should agree with the creator’s sentiments. how he raises his child, and how he perceives his child’s condition within the story. It’s hard to not respect his feelings though, during his personal journey.

It’s easy to have opinions and critiques about the way someone should take care of and raise their child. It’s a different story though when you are actually physically placed in their shoes. Will what they have done be the right wrong choice. What I mainly take away from the story, and the journey, is the beauty of a father’s love for his son, the hope and pride he takes in the little victories in his life. Families can connect with that regardless of whether their child is on the spectrum, or not.

Purchase your own copies Here!