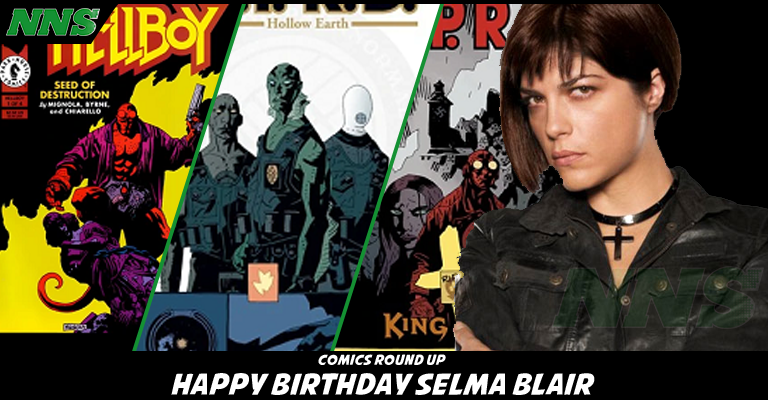 Let’s celebrate the birthday of the amazing and awesome Selma Blair. Born Selma Blair Beitner in Michigan on June 23, 1972, she is the youngest of four siblings. When her parents divorced when she was 23 she legally changed her name to Selma Blair.

As a child, she wanted to be a ballerina and horse trainer, but later in life attended NYU and acting classes at the Stella Adler Conservatory, the Column Theatre, and the Stonestreet Screen Acting Workshop. She later returned home to attend the University of Michigan where she graduated with a bachelor of fine arts in photography, psychology, and English.

She gained mainstream success for her roles in Cruel Intentions, Legally Blonde, and The Sweetest Thing.

When it comes to comic books, Selma Blair starred as Elizabeth Anne “Liz” Sherman in Guillermo del Toro’s Hellboy films. She is a pyrokinetic who after a traumatic eruption of her powers killed her family at the age of 11. While at one point she worked as an agent alongside Abe Sapien and Hellboy, she leaves the team before the events of the first film. During the course of the film, the emotions between her and Hellboy are delved into.

What some people might not know, is that Selma reprised the role of Liz Sherman in the two Hellboy animated films that take place before the events of the 2004 film. These two movies are Sword of Storms and Blood and Iron. While the animated films exist in the film storyline, they also are closer to Sherman’s backstory than existed in the live-action movies. She even reprised her character in the Hellboy video game The Science of Evil.

In 2018, Selma publicly revealed that she had been diagnosed with multiple sclerosis. While she had been suffering for years with symptoms before being diagnosed, it was her costume designer on Another Life, Allisa Swanson who convinced her to come out and tell her story.

With her birthday in mind and her amazing performance as Liz Sherman, we wanted to share some of our favorite stories of Liz Sherman in the comics.

Are you a fan of Selma Blair’s work? What’s your favorite role of hers? Let us know, and we’ll see you guys next week!