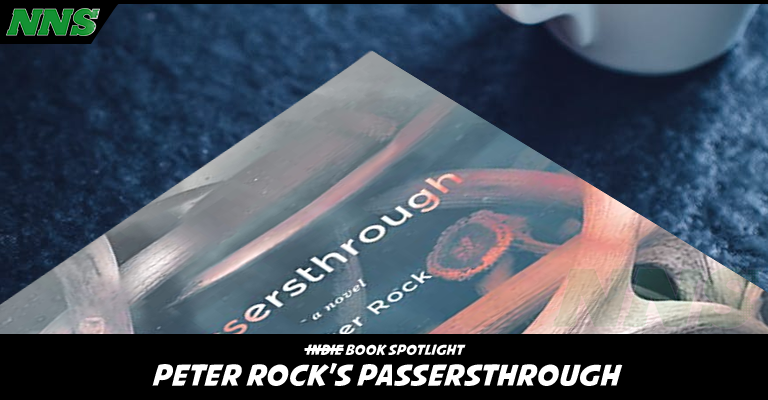 Hey, Readers! Welcome back to our monthly literary spotlight! I’m your host, Jim, and this month we have a book provided to us by the wonderful folks at Soho Press! Massive thanks to them and the team, there.

Passersthrough is a perfect read for Fall; it’s atmospheric and strange, filled with the woods and the rain. Honestly, reading it in late Summer as I did, I kind of envied Benjamin’s home in Portland and its quietness. The cold rain and snow.

I could probably do without the ghost kids, though. And the murder house. And the lake filled with bones.

I’m reviewing the Paperback, today! Grab a copy and read along!

This narrative is presented in several different ways. You have faxes shared between Benjamin and his estranged (Well, formerly estranged, I guess) daughter, Helen. You have transcripts of conversations they’ve had using a recording device. And then you have a more traditionally written, third person narrative to go along with it. You’re dropped somewhere in the middle of the story – Benjamin and Helen are reconnecting after something happened to drive them apart in Helen’s childhood. The loss of Helen’s brother and Benjamin’s son, Derek.

Helen is reluctant to talk too much about the past. Benjamin is reluctant to use this new technology – the audio recorder, the fax machine. He’s from a different era and his conversation with Helen tends to skew in that era’s direction… what was. Helen very much wants to build on towards a future with her Dad, but at a slow and steady pace and it seems she’s only willing to let that past drip in a little bit at a time.

They’re both trying to figure something out. What is that something? No clue! We, likewise, are only drip-fed information as to what this event might have been. We know it involves a dead little brother and a place called Sad Clown Lake.

(Don’t worry. Pennywise is on the other side of the country in Maine. Not a clown to be seen in this story.)

After getting a fresh haircut from Helen, Benjamin is out for groceries. He walks past a van with an open window and suddenly finds his face in a great deal of pain as it’s grabbed by the van’s occupant – a big, burly dog by the name of Johnson. Johnson’s owner, Melissa, is pretty apologetic and takes Benjamin home to patch him up.

Melissa is an enigmatic figure. Her van is part transport, part living quarters. She also squats in abandoned homes and has computers set up in them. She’s seemingly obsessed with Helen. We find out that Helen went missing from a camping trip when she was a child and was found some distance from her last known location. This was the same trip that caused Derek to lose his life. A misadventure.

How do these elements tie together? What’s the connection? You’re going to need to read it to figure everything out!

Passersthrough is an odd, odd book.

It’s dreamlike, in a way. A sequence of events that contains mystery that’s just barely out of reach at all times. The more information we get, the less we see we actually know. It doesn’t have what I’d call a standard, three act structure and it has an ending that leaves a lot of room for interpretation.

Now, don’t mistake that for a criticism! Much like the cool climate in the book, the story itself is a breath of fresh air. It’s nice to be presented with a story that plays by its own rules and asks only that you humor it while it does so. I empathized with Benjamin a lot. Most of the time, he’s just a nice old guy doing his best to make sense of events that are so far beyond his control that anyone could be forgiven for throwing up their hands, exclaiming “Nope. I’m done.” and walking off into pleasant retirement. But he takes care of the dog that bit him. He makes sure that Melissa’s brother is safe and cared for. He makes plans to teach the neighbor’s kid how to properly, and safely, sharpen knives. I don’t at all blame Helen for her initial standoffishness – loss affects everyone differently. But, I think, given the chance he’d be a nice old Dad to have.

All in all, I highly recommend Passersthrough if you like mysteries, supernatural horror (There’s not a lot, but what is there is genuinely unsettling.) and stories that will keep you guessing long after you’re done reading them.