One Piece Odyssey by Bandai Namco

Take on the role of leader of the Straw Hat Pirates. Reunite the crew after a bad storm and explore the world of the ever popular anime! 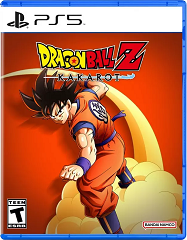 The epic battles and DLC of the original game are now released on the Next-Gen Consoles! for the first time. Play with Goku, Vegeta, Gohan, and more as you relive the story of Goku.