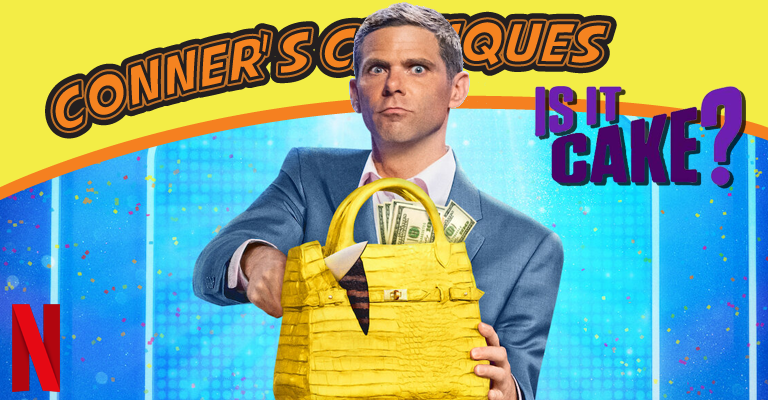 We previewed shows like Nailed It, and a couple of other reality programs in the past, so it shouldn’t come as a shock that when we saw Is It Cake? we had to jump on the chance to review it.

A lot of us here at Nerd News Social have a serious issue with the trend to make super realistic cakes. We know the truth. Realistic Cakes are just lies wrapped up in fondant, designed specifically to titillate our taste buds while terrorizing our nights and giving us anxiety over everything around us.

With that in mind, we were happy to review Mikey Day’s new show on Netflix. As always our reviews cover the topic of story, acting, and overall. We will have to take some liberty with the idea of story and acting, because after all, it’s a reality TV show, there’s not a script.

So it’s hard to talk about this show from the point of view of story. As we said earlier, this is a reality TV show and therefore there is no script. However, we can talk about the plan on the part of the creators.

The plan for the series revolves around a group of bakers who are involved in the show from start to finish. These bakers are specifically experts in the field of cake. They are not beginners, they are not amateurs, they are experts. Almost every single one of them has a history of making realistic faux items out of cakes, specifically designed to trick the average consumer.

The thing that makes the show really interesting, and a lot different than shows like Top Chef or Hell’s Kitchen is that those shows remove contestants once they fail or are voted off. With this show no one is effectively out of the running until over half the show is done, and all the bakers then sit in the peanut gallery and help out or talk to their friend co-contestants. They provide a great eye towards the process from a professional standpoint.

Once we start to get into the actual elimination portion of the show, the rest of the contestants still do not go away. They still sit and watch their friends perform, showing a comradery you don’t see in reality shows.

It creates a unique and friendly attitude between everyone, and I’m all for it.

The only one on this show that you could say is acting, would be the work of Mikey Day. I will say his performance as comedic relief, as well as a foil for the antics of the show, proves he was the right choice for casting a host. The thing that I want to talk about in this section, however, is not about the acting of Mikey Day, or the quality of judges they brought on, it’s the attitude and way the contestants act during the show. See what I did there?

As you go through the show’s episodes, all of the bakers remain throughout the series. They have built friendships and had even crossed the aisle to help a fellow baker. As one contestant, our favorite, Andrew said “I don’t want to lose to you because you made a bad cake, I want to win because my cake is more realistic than yours.”

This show isn’t going to change your life, it’s not even going to leave a lasting effect on the way you enjoy the cinema in the world. What the show will do however will give you a positive reality show to watch. A show that not only helps instill a general good feeling about humanity as a whole but also gives you anxiety about the fact that everything in your life might actually be cake.

And who doesn’t want that?

The one final thing I can leave you with is that this show has multiple levels of enjoyment and fun. That fun is based on the fact that as a viewer you get to see how skilled bakers make choices in their projects, and you get to have a little fun guessing which item disguised amongst the others is real, and which is fake… I mean Cake!

If you consider yourself a little bit of a detective, then this is your chance to show if you know “Is It Cake?”

Don’t forget to watch the show when it releases on March 18, 2022, right Here on Netflix.