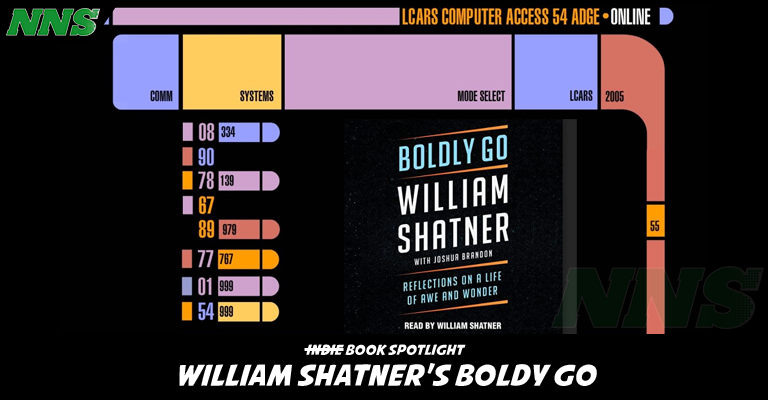 Hey there, Readers! How is the approaching Holiday Season treating you?

This month I’m taking a look at the latest book by William Shatner! Considering you’re here, reading this Spotlight on a site dedicated to nerd culture in general, I’m going to take a stab in the dark and assume that you’ve at least heard of him. Captain Kirk is such a fixture in the Nerd cultural landscape that even if you’ve never watched a single episode of TOS, you’ve seen him parodied or referenced multiple times. What is a little less known is that he’s a fairly prolific author and musician as well as an actor. With Star Trek in general making such a big resurgence lately thanks to Paramount+ (Have you checked out Prodigy yet? Holy cow, it’s good!) I figured there was no better time to read something written by one of the gents who started it all!

So, strap on that phaser (Set to stun, of course!) Grab yourself a Pad and let’s check out this book, the ultimate Captain’s Log! Stardate? Right now!

This is a hard section to do because this isn’t one single narrative so much as it is a collection of smaller ones. We start with a story about diving with sharks, then switch abruptly into a rousing story about Bill doing his own stunts on top of a moving train, then back to the sharks THEN we learn about the network of roots that help forests thrive, then we’ve got some fatherly and grandfatherly advice and reflection on the importance of family and how technology has changed, enhanced and evolved those connections…

As you can hopefully already tell, there is a lot of content here!

Each chapter has a theme connecting the anecdotes I would say this is a sort of autobiography but with the stories taking place out of order and flavored with reflections and thoughts on the events from an older, wiser William Shatner.

He’s an avid student of the natural world and that is something I share with him, so I found his thoughts on the environment and animals particularly interesting.

And, of course, he talks about getting to go to space. I was so excited that Captain Kirk finally got to really get out there into that final frontier! …though, his reaction to it was definitely not what I was expecting.

So! Less a synopsis, more of a grab-bag of interesting moments. Hopefully I’ve given you enough to decide whether this book is for you!

This was one I was reluctant to put down. I listened to the Audible version in several longer sittings but I also took smaller sessions in stride on breaks at work. It’s honestly riveting stuff! William Shatner is the one narrating the Audible version and he’s as charming and funny as you’d expect.

William Shatner has definitely lived an interesting life. From waiting tables to being one of the most recognizable stars in the world, and every shade of those two things you can imagine along the way. It’s not all fun and games, though – there are some particularly tragic events that take place in the book. One literally had me tearing up. (I won’t spoil it, but as I’m so fond of saying, you’ll know it when you find it and if you’re a fan, you may already know what I’m talking about.) Overall, though, the tone is hopeful, jovial and always interesting.

He touches a bit on his friendship with Leonard Nemoy (Spock), James Doohan (Scotty) and very, very briefly on the longstanding hostility between George Takei and himself. I’m not going to comment much on this except to say that I love both actors and hope that one day, those fences can be mended.

Being as we’re coming into the holidays, I try to keep my December Spotlights as a space to suggest holiday gifts for the Readers out there. Some people are very hard to shop for, but if you’re looking to get something for someone who reads? A book is never a bad option. This one is perfect for people who like Star Trek, of course, (That’s why I gravitated towards it) but would also be appreciated by anyone who enjoys autobigraphies, nature, and stories about Hollywood and the acting scene.