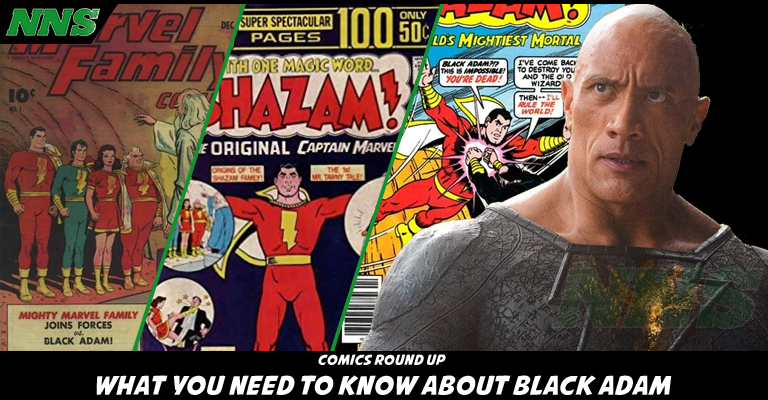 What’s important to know about Black Adam is that it wasn’t originally a DC Comic Book character. Black Adam, like Shazam, was a Marvel Family character. Before you get excited, it wasn’t a cross-over between Marvel Comics, but the creation of Fawcett Comics.

Originally, when Fawcett Comics produced Captain Marvel, they were sued by DC Comics, at the time National Comics, in 1941. Through a long legal battle, DC eventually succeeded in 1950 and Fawcett was to cease publications of Captain Marvel. This killed the comic book company and DC then purchased it in 1972. However, between 1950 when Fawcett abandoned Captain Marvel, and 1972 when the character was purchased, Marvel Comics started up, and DC could not longer call him Captain Marvel, opting for his catchphrase and the name of his mentor Shazam.

In the midst of the legal battle, Black Adam was originally created in December 1945 in The Marvel Family #1 by Otto Binder and C.C. Beck.

In the original line-up of comics, Black Adam was a predecessor to Shazam, from ancient Egypt. Black Adam survived the past and came to the modern day, where he challenged Shazam and the rest of the Marvel Family. His powers were near-identical to Shazam’s due to the shared source of their abilities.

In the 2000s though the character was rebranded from being a villain to more of an anti-hero.

If you are looking for some important comics to read before seeing the movie, here is what we suggest: