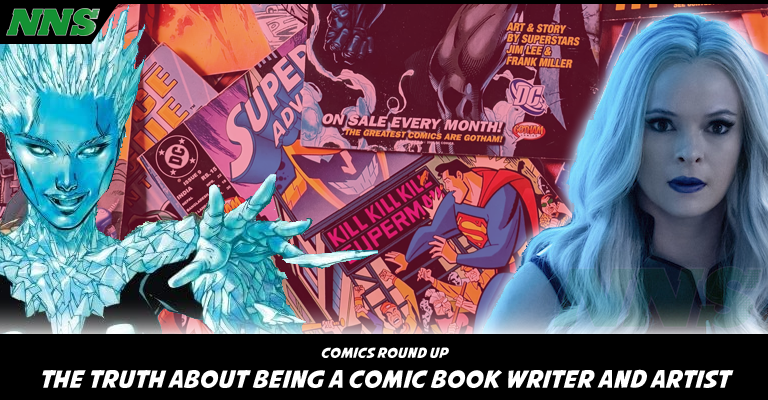 The curse of working in the comic book industry…. It’s not specifically always this way, it’s a job, and those with skills can make their living from the industry. We definitely aren’t saying you shouldn’t love or support the industry and the artists, but a lot of people who read comics are unaware of the dark side of the industry.

Sure, people know the big stories Like Bob Kane and Bill Finger, but those exact situations didn’t start and end there, and not every artist is getting credit and recognition for their contribution, and most would just prefer to be fairly paid.

A lot of artists who work in the industry are just paid for the work they create, being people who are using existing characters and telling the continuation of their stories. However, when a new character is created by a writer, that person becomes entitled to royalties from the use of that character. It’s not a thing to live off of, but if you create enough, it could help you in the off times. However, the contacts between the companies and the artists states that when the character is fundamentally altered, and the new character is only derived from their works, then they can not collect.

This would usually refer to things, like Power Girl, versus Super Girl. Power Girl is clearly a new character, but is based off of a clone of Super Girl. But things started to take a turn when DC saw what they could do with this rule. Take the story of Gerry Conway who recently got in the news when he brought to the public’s attention his situation with the CW and DC show The Flash. Conway specifically created a lot of characters, one such character was Killer Frost. The show took the character’s alter ego and placed them in the series, and when Conway came a calling for his paycheck, DC told him no.

They specifically said that the character was derived from his character, but had been changed for the series, and as such he could not collect.

However, in the past they’ve told creators that they can not collect from a character derived from pre-existing content. DC got a lot of egg on their face, when fans pointed out they were trying to have their cake, and eat it too. As if no one, except for DC owned the rights to this new character and no artist deserved to be paid.

Few Make It Big, Many Don’t

Why is it that when we think about the big names in Comic Books, only a handful of names come to mind? The amount of people needed to write and draw all the collective comics of the world is massive, and has been going on for some time, but the larger names stand out, and are viewed as “creators” when usually, it’s because they used contracts to solidify creators were working beneath them, and all their content belonged to them.

Even Stan Lee, a figure we loved took credit for being the figure head of Marvel, when other creators worked with him as well. Sure a hardcore fan know that Spider-Man was a creation of Steve Ditko and Stan Lee, but if you ask any kid in love with the new MCU movies, they’ll only tell you one name.

This isn’t a problem that only effects comics though, as few know of Ubbe Ert Iwwerks, the man behind the mouse, in front of Walt Disney.

The Results Of A Broken System

Most artists get frustrated and leave the profession, move onto other fields, or just trudge through the system until they die, usually of a medical condition that they don’t have insurance to cover.

In the last five years several artist, some well known, some on the fringe of the industry have created GoFundMe pages specifically to cover severe medical issues because the industry doesn’t support their employees later in life.

So How Do We Solve This

First and foremost we need to support the artists when ever we can, over the brands. When you see your favorite comic book artists at conventions, commission work. Follow and appreciate artists who create their own titles and brands.

Remember, at the end of the day, it’s your money that influences the industry, and if you choose to support the companies that support the artists, you are doing a lot more then you may realize.