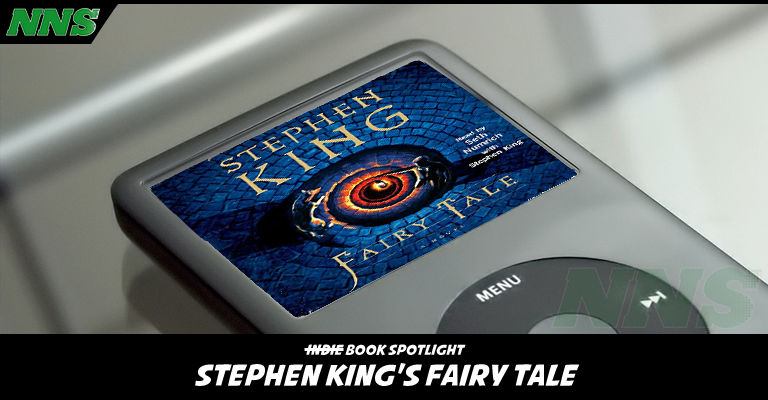 Hey, Readers! Welcome back to our monthly book discussion! This month we’re tackling a hefty novel by the Master of Horror – Stephen King! Perfect for October, right?

….well. Sort of. This is definitely not a horror novel. There’s some horrific stuff in there, but this is more akin to The Talisman and the Dark Tower books than it is to Desperation, Christine, The Tommyknockers, etc.

And that’s fine – honestly, I’d say this is his best book in a really, really long time! Grab a copy and join me, won’t you?

Charlie Reade is a great kid, for the most part. He’s in high school and plays a mean game of baseball and football (He scored the winning touch-down in the turkey bowl two years ago, you know.) as well as being no slouch in regards to his academic classes. He has to be on top of things – after his Mom was killed in a horrible traffic accident almost a decade ago, his Dad fell into a spell of alcoholism. A bad spell of it. Charlie had to grow up fast as a result, so, he’s no stranger to taking responsibility for himself. Even though his Dad got help and is now back on track, those years took a financial toll on their small family unit, to the point where if Charlie wants to go to college? It’s going to have to be via scholarship or with the help of some grants. Anyway, this story really kicks off when Charlie tells us that during one of his darkest points, when he couldn’t sleep because he was afraid that they were going to wind up homeless because his Dad had been made unemployed, he prayed. More specifically, he made a bargain with whatever higher power was listening that if his Dad stopped drinking he’d do whatever this higher power wanted. Anything, just name it and thy will be done.

Now, in a Stephen King story, you kind of expect something malevolent to be listening. (Sure, kid – Dad lays off the booze and now you’re going to be thrown into some messed up stuff. Buckle your britches because it’s all down-hill from here!) But that doesn’t seem to be the case… at least, at first.

One day, Charlie is walking home and he hears a neighbor’s dog yelling; seemingly pleading for help. The noise is coming from a house known affectionately in the neighborhood as The Psycho House. But, being a generally good kid, Charlie can’t help but investigate and try to help. He finds the home owner – Howard Bowditch – lying prone after having fallen from a ladder.

Mr. Bowditch isn’t exactly a warm and convivial sort, but he is genuinely grateful for Charlie’s help. Especially with the aforementioned dog, Radar, who is also old and a little fragile. Charlie offers to look after Radar while Mr. Bowditch is in hospital and… well. He falls in love with the old German Shepherd. It’s easy to do as Radar is, as well as being old, just a very sweet dog.

As things progress, Charlie comes into the confidence of Mr. Bowditch more and more, eventually becoming not only a caretaker, but a dear friend to the old man… who is, of course, dying. (Not from the fall, from other things.) This is IT. This is his chance to repay the higher power who had helped his Dad crawl out of the bottle… he just knows it. Upon his passing, Mr. Bowditch leaves Charlie an audio cassette that explains some things Charlie had been wondering about. Why the shed in back of the house is always locked and why noises emanate from it sometimes. Why Mr. Bowditch seems to not know exactly when he was born. Oh, and another small, trifling thing; where Mr. Bowditch got a literal bucket of gold pellets from and why they’re in his upstairs safe!

This is where the adventure really starts – an alternate world (Or maybe two!) is waiting for Charlie if he’s just brave enough to look for it. Not only that, but it could save Radar from suffering the same fate as her owner… at least, it might hold death off for a little while. But this magical world isn’t one of peace and harmony… it’s facing down monsters and problems of its own. The kind of problems maybe a boy and his dog can fix if they’re willing…

Intrigued? You should be.

I love dogs. They’re too good for us, we don’t deserve them. I’ve had several over my lifetime and honestly, if someone had told me “Yeah. They don’t have to die. Stopping it is dangerous, but it can be done.” I’d have been all-in. Whatever it takes. Let’s Go. Charlie seemingly agrees with me and is willing to traverse an entirely different world in a parallel dimension to keep Radar alive. To him, it’s absolutely worth it and I can’t help but agree. Charlie is the hero of this story not because he was born a chosen one (He wasn’t. He grows into it.) or because he’s willing to put in the work to overcome adversity (He is.) but because he’s willing to risk it all to give a sweet, affectionate older dog a chance to run and play again. That’s my kind of hero, folks.

The world Charlie goes to definitely feels like some version of The Territories from the Talisman books, or like Gilead from Gunslinger Roland’s youth might be one Kingdom over. Two parts magical fantasy realm, one part convergent evolution of our own technology, it’s an intriguing place. If you liked any of those books, this is going to be right up your cobblestoned alley.

I listened to the audio version via Audible (I’d pre-ordered it, in fact.) and the narration by Seth Numrich is honestly pretty incredible. His range and the voices he gives each character are fantastic. Several times I had to double check and make sure this wasn’t a group effort with multiple narrators because he does such a great job. There’s also a section in there narrated by Stephen King himself, and it’s always a treat to hear his voice.

If you’re looking for something dense and interesting to sink your teeth into this spooky season, I can’t recommend Fairy Tale enough. It might not serve up any big scares, but you’re going to love the story of Charlie and Radar regardless.