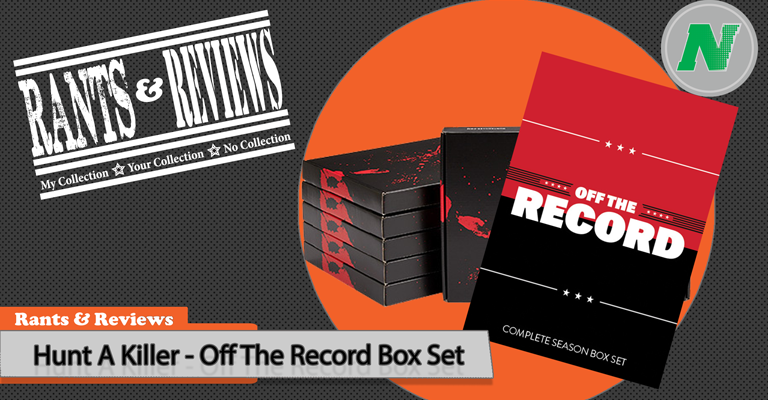 Subscription boxes are an interesting entity that isn’t going away anytime soon. They can do so many things, like send swag to fans, deliver samples of items, and supply a mystery adventure. Hunt A killer’s boxes fall into the latter category.

Traditionally in the past, you’d subscribe to their service and receive a monthly mystery box over the course of a period of time. As you receive the boxes, you receive more of the story. Expanding your knowledge of the mystery’s world, allowing you to chip away at smaller mysteries within the story to find the final solution in the end.

For those who weren’t the waiting type, Hunt A Killer has single mysteries in a box that are quite enjoyable. But for the first time, they are releasing their prior subscription stories as box set collections.

With that in mind, they sent us their “Off The Record” series. This is a six-episode series that focuses on the death of a reporter who was covering two political candidates running for mayor with a dark history. Led by one of her sources/friend, you’ll follow the reporter’s final footsteps as you try to find out what killed her, and why.

The experience was definitely fun and engaging for myself and my family.

The mystery was well-designed, and not easy to discern at the start. It built up as the world was revealed over the course of the box set. There was tons of backstory to dive through in every box, and while you could simply solve small mysteries and move on, the data allowed you to build a much bigger picture of the events.

If you were feeling lost while playing, Hunt A Killer’s website has many spoiler-free hints and step-by-step guides to put you back on the right track without spoiling the ending.

Another thing I loved was that at the end of the experience, there was a teaser for the next mystery series, set up as a clue and in the universe. It really makes you want to keep going through the future series!

If you have a friend who loves mysteries, then I highly recommend you pick them up a subscription to Hunter killer’s subscription box mysteries! Pick up your own Here!