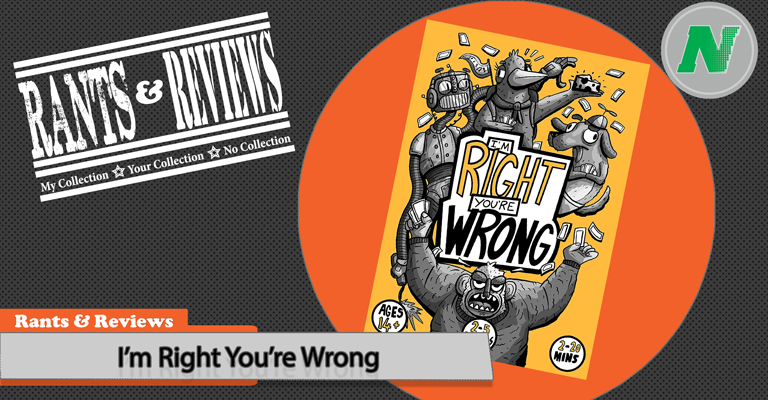 During San Diego Comic-Con a company reach out to us, having seen us at the event, and wanted to get the Rants and Reviews treatment for their game.

We love indie creators, so we jumped at the chance to check out the game I’m Right You’re Wrong.

This is a fast paced game that plays anywhere from 2-to-5 players and is a fun addition to any game players collection.

Normally we just talk a little bit about the game’s concept during our Rants and Reviews to go along with our video unboxings. Due to the fact that this is an indie game, we want to dedicate a bit more time to talk more about how the game works.

How to play the game:

The way the game is played start off with each player starting with 5 cards. If you want to make the game a little bit faster, you can reduce the starting hand to 3. Players at the beginning of their turn draw a card, and then play a card. Playing cards have effects that can be found directly on the card.

These cards can cause traps, add rules of the game, or just cause a negative effect upon the card player or other players in the game.

The object of the game is to cause other players to not be able to play the game by making them break the rules, not having any cards in their hand, or just waiting until the other player screws themselves over during the game.

This game is a lot of fun. I love the artwork and style of the cards. The age requirements for the game is players over the age of 14, but game is not inappropriate, but slightly aggressive. If your children are a little bit more advanced, and have no problem reading and understanding game concepts, they could easily play this game… if you will allow them to.

Check out our video below.

If you want to just order it from Amazon, you can do that too Here.

You can also follow them on social Here, and show them love and support.