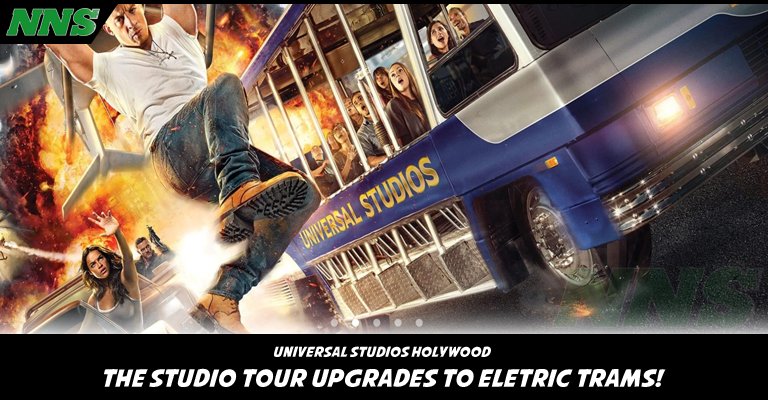 Over the years the Tram has stayed the same at Universal, just shifting the stops or places they cover. From the original King Kong and Earthquake experiences to the new Fast & Furious—Supercharged and King Kong 360 3-D stops the ride has changed over the years but maintained itself as a major attraction for fans to enjoy and flock to!

Always looking to the future, and I can’t imagine the gas prices of late haven’t helped push them forward, Universal Studios Hollywood has now converted all 21 of their fleet of trams from diesel-hydraulic engines to electric tram engines to help reduce carbon emissions.

One added benefit to having the best-in-class electric trams for the tour is that the noise produced by the unit will be heavily reduced, and allow the guests on the attraction to be able to fully immerse themselves into the experiences throughout the ride.

While it’s unknown how much fuel the tram system has been using over the years, the tram runs an hour-long, driving over 13 city blocks with stops between locations. That’s over half a mile each hour, with multiple trams running at a time. That’s a lot of diesel fuel! Now they’ve reduced that footprint to 0 gallons with electric trams. That’s awesome.

Due to their slow-moving, and heavy usage, the theme park turned to WAVE, Wireless Advanced Vehicle Electrification, for an inductive charging solution for the trams. The vehicles are constantly moving, and need to keep their juice. Using regenerative brakes to help charge the units, downhill charging, and induction charging when the trams are stopped at the beginning and end of their routes will help provide the needed energy solutions to keep the vehicles moving all day long.

This whole process is only possible due to Universal Studios Hollywood‘s collaboration with Complete Coach Works and Southern California Edison in addition to a grant from the South Coast Air Quality Management District that allowed them to use the same trams with a different and ecologically friendly solution.

I can’t wait to ride the tram at Universal to see how different it is without the engine noise, which since I usually ride in the first car, is a common experience.