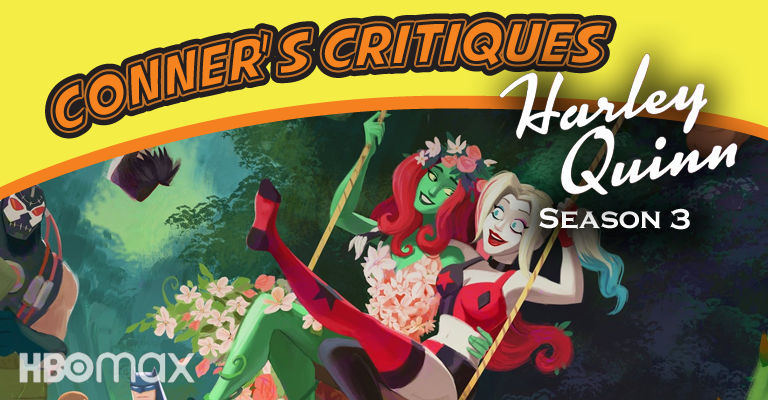 The first three episodes of Harley Quinn have dropped all-in-one go. HBO Max loves to give their fans a giant chunk of their shows to begin with.

We’ve decided because of the way that the show changes it’s format and adventures, due to the two main characters entering into a relationship. With that in mind we wanted to talk about the first episodes of season three and if it changes the viewing experience for the better or worse.

As always, our opinion is broken down into the categories of story, acting, and overall. Let’s jump on in!

Right off the bat the viewers are treated to the tail end of their Eat. Bang! Kill. Tour! Which you can see more of in their comic book of the same title that was released between this and last season. Start your journey into that comic Here.

Already a couple months into their relationship, the duo are to hit with a couple speedbumps as their personalities are radical different then each other. Harley needs constant chaos in her life and Poison Ivy craves downtime, and isolation every once in a while.

The pair put in the work and there is a ton of back-and-forth as each try to keep a mindful eye on the needs of the other. In spite of the change, the two still embodied all that they where before, but it’s an interesting change for the character’s compared to the prior season.

While Kaley Cuoco kills it as Harley Quinn once again. The big changes in performance this season is clearly Lake Bell as Poison Ivy. The way that she’s able to convey so clearly, with her voice as well as the animation, her anxiety, frustration, and self doubt is quite impressive.

Additionally the representation of Batman as a family man is awesome, as he slinks around in the background. He’s not in the show a whole lot, but his reactions to finding out they’re making another movie about his father is gold. Additionally in the background he deals with the eternal politics of the Bat-Family, it’s just a great amazing storm of fun.

What is definitely a major change from the past couple seasons, the prior seasons always presented a relationship between the two. Even though the relationship was platonic, the difference is not that off the base from prior seasons, only now they get to have sex. Well I guess they also did that in season two…

“They are actively making efforts to care about one another, communicate, and work to make sure they don’t have a toxic relationship.”

No matter how mentally unstable both of Harley Quinn and Poison Ivy are, it’s nice to see how their relationship is being showed off as being healthy. They are actively making efforts to care about one another, communicate, and work to make sure they don’t have a toxic relationship.

The show takes raunchiness to a whole new level as always. I would specifically be very careful about watching this show with younger audiences. I know it’s animated, and I know it includes Batman, but no matter how much your five year old wants to watch the new Batman show featuring Harley Quinn, this is not for them.

Addition if you made it all the way through this entire review and you still haven’t seen a single episode of Harley Quinn, HBO Max has released the first episode from the first season for free on YouTube and it so it can be watched Here! You’re welcome.