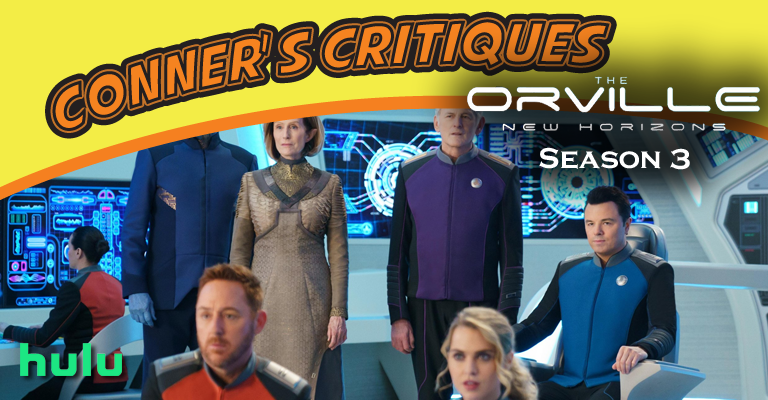 We waited two long years for the Orville to return. Two years as the show transitioned from Fox to Hulu, and even gained a new name, New Horizons, in the process. While time passed and some worried we’d never get the new season, Seth MacFarlane held firm and gave us an amazing third season.

We’ve actually covered this show’s new season already a little bit, you could see our early review for the series Here, and you can even see our interview with the supporting cast at San Diego Comic-Con Here.

We’ve beaten around the bush long enough, let’s jump back into our review and as always we”ll tackle it by discussing the story, acting, and overall. Let’s jump in!

As you said before, this season’s story goes a lot heavier and a lot more in-depth than the categories and territories that most people were surprised to see Orville tackle this year. As actor J. Lee said in another interview, he doesn’t believe these topics should be heavy. They’re just topics. Humanity makes them heavy, and that’s part of the reason Orville is trying to normalize their discussions.

This season however tackles a very interesting concept, on top of everything else, and that is “Who are we if we let these events transpire.” This concept is explored and broken down from topics as simple as trade negotiations, all the way to genocide.

The one thing that I love the most about Orville is that the Union representation throughout the show never falters. It’s supposed to be an idyllic representation of good, and it always holds true. There’s never a moment where you look and say “Wow I can’t believe that Union agreed to that!” They are constantly trying to do what’s right, even when their hands are tied, they make it very clear that they are willing to look the other way if the outcome is right.

It’s for reasons like this that I am glad that they chose to end the war between the Kaylon in the most honorable fashion possible.

At the end of the day the series is a comedy, and it can be hard to see that through this season. Actors like Seth MacFarlane and Adrianne Palicki, the main characters in the series, do a great job not being funny this season. Not a dig, they specifically are forced to pull double duty and do a great job standing on some serious concepts.

Ensign Charly Burke is an amazing character within the show. She does a great job as a newbie to the series. She gets to be the skeptical voice against Isaac within the series because everyone else on board who are main characters has had a long relationship with him. By peppering some serious loss and bigotry against his kind, Charly has to actually venture through difficult territory. Anne Winters does a great job making her a complex but not hateable character. The character has her opinions, but outside of her own personal pain, and how it manifests against Isaac, Charly is just a human dealing with a lot of pain.

I don’t want to short-change any of the other cast in this series. They all do an amazing job and are an intregal part of the series.

I’m going to be really upset if the series ends, just because they do such an amazing job with inspirational sci-fi in a world of closed-off depressing visions of the future and people lining up to join the metaverse because they’ve given up on the idea of a good actual world.

With that said, I can see how the people at Orville have done a good job wrapping up the story and allowing the show to not end on a cliffhanger. There is hope. Hope for more adventures, hope for the characters, and hope for more Orville.

I love what this show is able to accomplish with its format. The fact that it can cover modern-day issues, but with a sci-fi twist allows it to talk about the fact that they overcame the issues we are dealing with now, and use our matter-of-fact years later approach to still find the right way or difficult route through these issues.