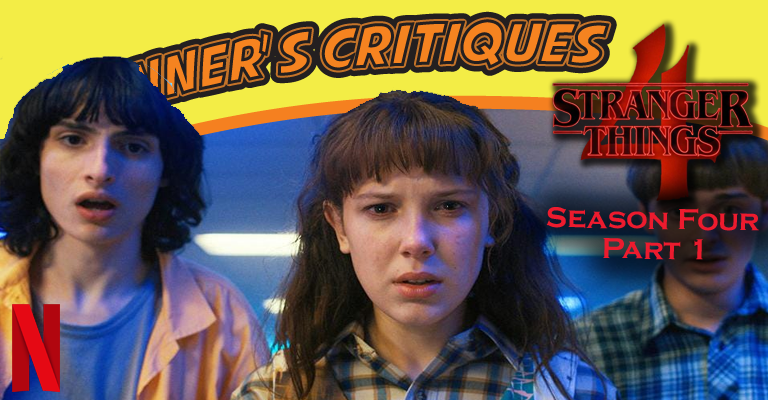 Stranger Things’ fourth season has been broken up into two parts, and we are here to talk about the first of the two parts. The collection of episodes already dropped on Netflix, but we’re going to have to wait until July for the next part of the series to be released.

If you’re wondering if you should jump in to the first part of season four’s episodes, or if you should wait for the next part to drop so you can watch the who season as one. Then you should check out our review of Stranger Things season four – part one, but be warned there are spoilers within.

As always we cover our reviews by talking about story, acting, and overall. So let’s jump on it.

We pick up a year later from the last season. Our main cast of characters have entered into high school now, with our older group either having graduated or finishing up high school. As spring break arrives, it brings with it an adventure for Mike. He is finally going to be able to spend some one-on-one time with Eleven in sunny California. However, everything that Eleven has been telling Mike about her life in California is not what it seems to be. Instead of being the fun and popular person that Eleven has written about in her letters, she is tormented and bullied because she is different.

When her rage from being bullied finally boils over, she (unpowered) lashes out and it brings police attention. This put her back in the crosshairs of the government agency at the worst time possible. Strange things are returning to Hawkins, Indiana.

Back in Hawkins a mysterious force appearance to be mutilating troubled teens all around the town. With each attack leaving weak points between the upside-down and Hawkins. The Gang races to find a solution, once the new big bad sets its sights on Max.

The story focusing on the group in Hawkins is a lot more interesting then the California season, especially the time and attention given to Max. Eleven journey though forces her to make some serious sacrifices in an attempt to regain her powers. To reach her goal though Eleven will have to make peace with the monsters and mistakes in her past.

A third story also sees Joyce and Murray trying to get Hopper home from Russia, while it’s an interesting story, compared to the other two stories it’s a slow and bland but necessary story.

While the cast of characters are all great and a lot of fun, there is clearly a couple standouts within the series.. The first of course being how fun Murray, played by Brett Gelman, is as a character. Joining in the 2nd season, Murray has clearly made his mark upon the show. Another clear stand out for this season is the amazing and stunning Max, played by Sadie Sink, having also joined in the second season.

“Max really gets her ability to shine this season … that showcases a beautiful and stunning allegory to depression.”

Max really gets her ability to shine this season, with one of the most powerful episodes in the entirety of season four, part one if not all of Stranger Things. There is a power ballad and an emotional escape from harm and danger that showcases a beautiful and stunning allegory to depression. Goosebumps.

I know we warned about spoilers, but if I mention anything more specific about the scene it might ruin it for those who haven’t seen it, but my holy hell it’s amazing.

Part one really does a great job setting up an anticipation and raising the excitement for the soon coming part two. I think the show does a good job setting up the next session without creating a huge amount of cliffhanger questions. Most of the storylines from part one are closed in some if not most ways, with of course the exemption of the very last surprise.

The show retcons a little bit of prior events within the history of Stranger Things, and the existence of the upside-down, but it does a good enough job standing out in a way that makes it acceptable and forgivable for the purposes of telling a better story.