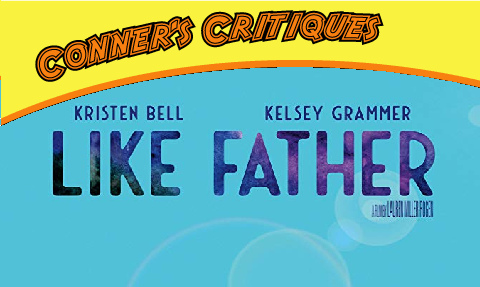 Hello and welcome to Conner’s Critiques. My name is Conner Sharp and I’m very excited to return again to do another review for this website and share it all with you. My reviews/critiques will be based on three categories: Story, Acting, and Overall. So lets begin.

If your reading this, you’ve likely got yourself your own (or a families) login to Netflix. Congrats by the way. There are tons of movies that exist out there to watch, and you want to know if this movie is worth your time. Fair enough. Be advised there are some SPOILERS, but not as much as normal. Regardless, be advised.

STORY: 8/10
I have to say, I did not expect a lot from this film. It felt like a cliche subject to go over. It’s been hit so many times by some many actors, production houses, and even made for TV movies. That being said, it might be that factor that allowed this title to shine, where another movie who would be taken more seriously would not have been. The movie starts off with a no-nonsense business woman gets dumped at the alter as a direct result of her business lifestyle. It reminds me of the comedy short Michelle Wolf did for her show on Netflix.

While I really liked this movie, I wish we’d stop making these, “Woman loves her job, so she is a monster, and therefore she should learn to focus on other things in life.” I wish that I was kidding that this isn’t a common theme in movies, but it really is. That being said, the movie is refreshingly not designed to make her stop being so business oriented so she can get the man. Unless you think connecting with her estranged father is getting the man. Which is kinda gross. Stop thinking that.

ACTING: 9/10
I am heart broken. I wanted to give this a ten, but I am marking it down for stereotypical gay man role 1 and 2. I like how they addressed her father’s relationship with his “partner”, but our only gay characters in the movie are stereotypes. That makes me sad. It’s the only black mark in an amazingly cast movie. Most of the actors are no bodies or second string actors. However, they shine and wow the screen.

Kelsey Grammer is amazing and heartwarming. I can honestly say that I love Kristen Bell in this. I used to hate Kristen Bell, I found her to be too poppy, and felt like she was being forced on me. However her works in the last 5 years has solidified how much of an amazing actor she is. While this also shouldn’t really play a factor in her acting ability, she is also amazingly likable in real life as well.

Lastly I will say that Seth Rogan’s cameo in the movie felt like it was a lot smaller then it was advertised to be, but was amazingly perfect when considered with the context of what the movie really is!

OVERALL: 8.5/10
Wow. Just wow. This movie is so much better, heartfelt, and powerful then it has probably any right to be. If you are going into this expecting to see a Comedy (little d) drama, then prepared for a Drama (little c) comedy. This is not the Female version of Forgetting Sarah Marshall. Although… How awesome would it have been if they got Jason Segel to play the man who leaves her at the alter? I kid. That movie would have been a stupid worthless film if they went for that self-referential joke, as opposed to the heartfelt film it was.

The only last overall comment I will make is, this film felt like a Royal Caribbean Cruise commercial. As someone who hasn’t went on a cruise for over 17 years, I can tell you, this is not your average cruise line experience. This is the 1% cruise experience. I mean, if this movie needed all that Royal Caribbean money/product placement to get made, fine I get it. I’m happy the movie got made, but it honestly felt like it needed an after credit scene with a phone number for your local travel agent. BOOK A CRUISE TODAY!

Conner’s Final Thought(s):
If you haven’t seen this movie yet, see it. It’s not going to change your life, but it’s just the right amount of sappy, and comedy to keep you watching.