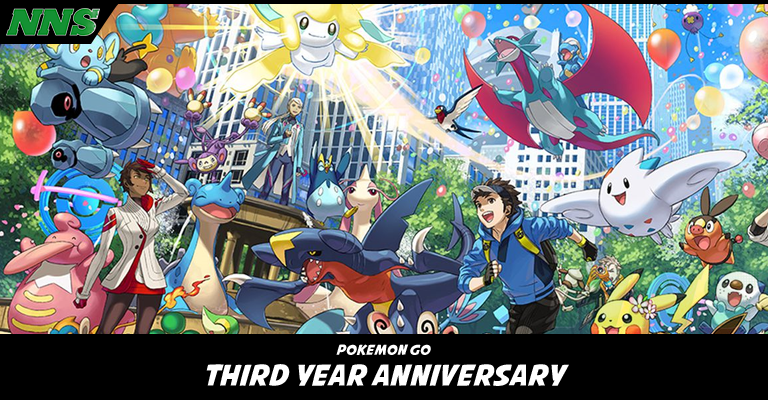 That’s right; Pokemon GO is almost three whole years old. Launched on the 6th of July 2016, it was the first AR game of its kind, and it was a world-wide phenomenon.

That last part may sound like hyperbole, but it’s not. It was in the news everywhere and stories ranged from the dangers of being unaware of your surroundings in dangerous places, all the way to people forming new friendships and bonds as they happened to meet while catching that rare creature that spawned out of the blue. From children all the way to senior citizens, it seemed like everyone was roaming the streets, that Trainer swagger laid on double thick, using the tracker to chase down zubat and weedle and zubat and rattata and pidgey and weedle like four more times…

I’ll never forget wandering my neighborhood with my Wife at two in the morning only to meet up with some fellow Trainers who were, likewise, combing the streets for rare monsters. The park near the police station was known to spawn Pikachu, you see, and that was still a tricky one to find in those days. Or bonding with my new boss over the game, driving around the parking lot of our work to get stops and scout out new Pokemon to catch.

And, I say this in all sincerity: Pokemon GO was literally the only reason I got a Cell Phone. Not even kidding. Prior to that, I had no desire to own one. But I didn’t chose the Trainer Life… it chose me.

With so many Pokemon becoming available in their Shiny forms, it was hard to pick just one to do a Spotlight on… but I think this one is the most relevant to the game due to its unique double typing and overall usefulness in battle. Alolan Exeggutor! 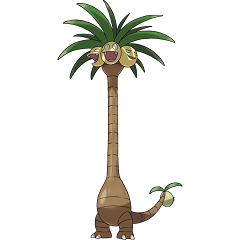 This was one of the most interesting additions to the 7th Generation’s roster, in my opinion. Sure, it’s goofy looking and gangly and the typing makes little sense…. but it actually ties in to a little bit of lore from the 3rd Generation. More on this later.

Alolan Exeggutor evolve from otherwise normal looking Exeggute in the Alola Region. Exeggute are six egg looking plant seeds that form a bond and travel together, taking care of one another. Aw. They are durable and tough and even if they crack they can still move around without spilling their insides out like a real egg would. When the cracks on their shells start to multiply, that means they care close to evolving into either regular Exeggute or Alolan form depending on the locale.

In the Pokedex entries for Ruby and Sapphire, it is stated that this Pokemon family originates in the tropics! Considering there are no tropical regions in the Pokemon franchise up until Alola, we can only surmise that this Pokemon is not Kantonian in origin! In fact, far from being a spin-off or variant of the original, Alolan Exeggutor is the original form and the shorter, squatter Kantonian version is the mutant strain.

Told you there was some lore to uncover, there.

And the Alolan people would agree with me on this idea; it’s stated in the 7th Generation Pokedex entries for Exeggutor that they take great pride in the height and appearance of their Pokemon and believe this is how the species ought to look.

In Pokemon GO, Alolan Exeggutor has a Max CP of 3014, which is pretty respectable for a Grass type. It has Attack of 230, Defense of 153 and 216 Stamina. So, it’s no lightweight in Attack and Stamina, even if its Defense leaves a little to be desired. It makes a great Raid counter against Rhydon, Kyogre, Donphan and any other Ground and Water types. Not such a great Gym defender… but it’s pretty funny to see them in there anyway.

Well… that’s all I have on Alolan Exeggutor! I hope you manage to get a Shiny one, as well as the other Alolan Pokemon.

And did you see the artwork for this event? So many great Pokemon on display here with the Team
Leaders and Professor Willow. And… hey… wait a second. Look at what they managed to sneak in there!

Well. It looks like we may start on Generation 5 sometime soon!

Till next time, Trainers! Happy Hunting!