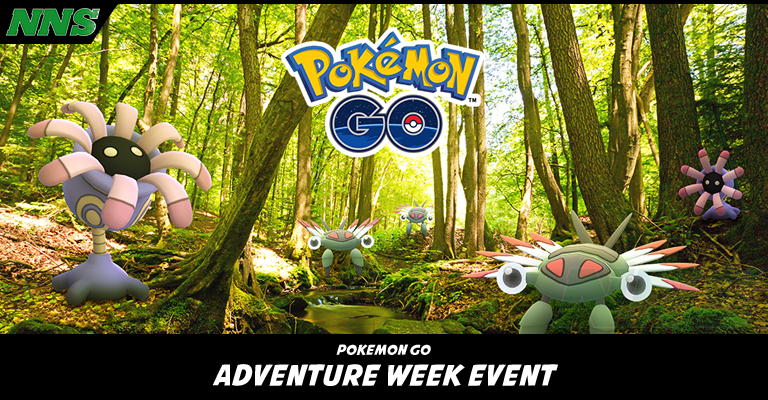 Trainers! It’s Adventure Time, come on, grab your friends… and by friends? I mean Pokemon.

Adventure Week is here again! Much like the Adventure weeks of years past, we have a range of new bonuses designed to get you out and about and walking.

As with last year, Pokemon normally revived from fossils are getting a shiny new coat of paint, but so is an old favorite – Onix! This Rock Snake Pokemon is what we’re going to be focusing on for our spotlight section this time around. 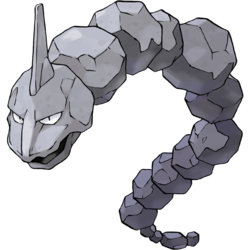 Onix became a staple of the franchise right from the start; being one of Brock’s mainstay Pokemon, we saw him get Ash and the gang out of trouble in many instances. At first, Onix was an adversary, and Ash had to enlist the help of a mysterious drifter to power Pikachu up enough to damage the Ground type Pokemon. Ash did this by plugging his partner into a pedal powered generator and literally power-cycling his pal into thus far unforseen levels of electric discharge.

Of course, this would never work in the main series games due to Ground’s total immunity to Electric type moves…. but in Pokemon GO? Maybe. (Note to self: Invest in a larger portable charger.)

Anyway, Onix is one of the original 151 and pretty iconic. He’s a Rock/Ground type monster and had no evolutions in the first game. In Johto, with the introduction of the Steel type in Generation Two, you can take this already powerful Pokemon and evolve it into Steelix. It switches its Rock typing for that sweet, sweet Steel. We know from the Pokedex that Onix burrows through the ground at speeds of 50mph, and ingests dirt and rock as it does so. These foods are what makes Onix so rock solid! Over time, its body becomes smoother and rounder, but also harder, eventually becoming something akin to black diamond. The sounds of its burrowing are thunderous, and Diglett are known to use Onix’s burrows as homes.

Steelix, while not quite as iconic, is a solid entry into the main series. Its Pokedex entries inform us that it lives even further underground than Onix, closer to the Earth’s core at .6 of a mile. (Which doesn’t seem that deep to me? Any geologists out there to give me a little more insight on this?) Anyway, the pressure and heat that low underground, coupled with its high iron diet compress this Pokemon’s body into something harder than any metal, as hard as diamond. It chews through rock and boulders with ease using those gigantic jaws.

Now, let’s see how Steelix ranks in Pokemon GO, and whether your shiny version will be the bane of your enemies, or just a pebble in their shoe. 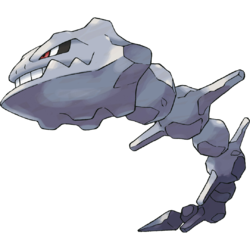 With a Max CP of 2414, an Attack of 148, Defense of 272 and Stamina of 181? Steelix is an all-round alright Pokemon. That Defense stat is where it really shines. If we compare it to a similar Steel type in Aggron, it has less CP, less Attack, but a better Defense and Stamina. In short, Steelix is a slightly better Gym defender than attacker, but is alright in both roles.

For moves, it has access to Dragon Tail, and Iron Tail (STAB) and for Charged moves we have Heavy Slam (STAB), Earthquake and Crunch. For pure power, Iron Tail and Heavy Slam are best, but considering it is a Steel type and therefore resists Psychic type moves? Crunch is also an acceptable option if you’;e using it to take on Psychic type Raid Bosses. (Azelf, Alakazam, MewTwo, Deoxys.)

Onix and Steelix both trade out gray for a more golden hue so they’re pretty distinctive and easy to spot.

And there you have it, Trainers! Adventure Week 2019 in a nutshell. Good luck catching some shiny fossils and rock snakes. Are you planning to do some extra wandering this week to get That 50km bonus of Candy and Stardust? (I know I am.) Which shiny are you most excited to find? Let me know in the comments!