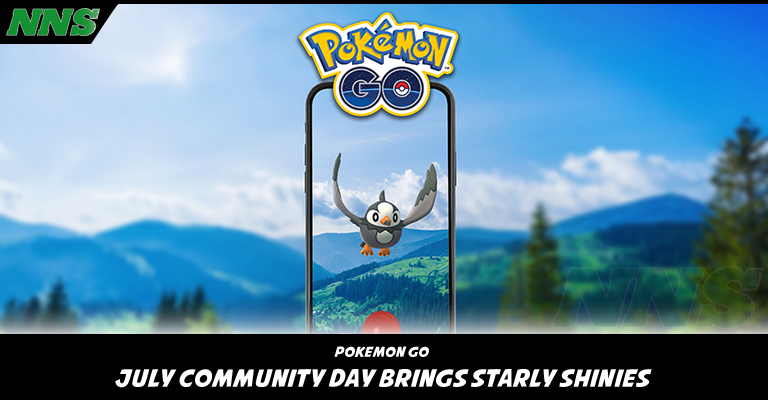 Hey, Trainers! Welcome to July’s Community Day! Hope you’re managing to remain at a reasonable temperature out there. Stay hydrated!

So, this month we have the Route 1 bird from Sinnoh – Starly! Makes sense. The past year has seen a lot of Sinnoh love from Nintendo and Game Freak, after all. (Is anyone else surprised that EX Raids haven’t made a return with Arceus as the star?) So, let’s check out all the pertinent details!

Let’s snag some binoculars and practice our ornithology, Trainers! 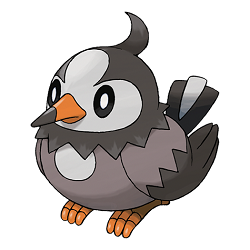 Starly is the chunky birb that we all met in our early adventures in Sinnoh. It shares routes with Shinx and Bidoof, so, it’s lucky any of them survive to adulthood. The Pokedex tells us they’re weak individually so form large flocks…. though, if the flocks get too big they’ll squabble and bicker amongst themselves. Considering their cry is noted as being ‘annoying’ (The Pokedex’s words, not mine.) this is probably awful to listen to. As you would expect, they chase Bug Pokemon to snack on.

Sidebar: Middle evolutions are known to be awkward looking…. but Staravia is possibly the poster child for this phenomenon. 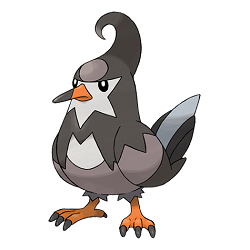 Poor thing. Looks like it doesn’t know what to do with its feet.

And then we have Staraptor. The Flying Type most of us used well into the late game in our Sinnoh playthrough. This absolute unit earns its place on all those teams by being badass looking and strong. The Pokedex tells us that this Pokemon fusses over the state of that impressive do… but not to the point where it won’t attack much stronger, larger foes. It has left the flock behind at this point, its nature too aggressive to allow it to live peacefully with others. This bird of prey truly is a raptor – it has wing and leg muscles that allow it to grab prey and carry it away to snack on at its leisure. Absolute savage.

But… can it savage your foes in Pokemon GO? 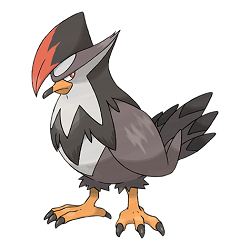 As a Normal/Flying Type, it has 3 weaknesses in Ice, Rock and Electric. It has a special resistance to Ghost and Ground Type Attacks, with regular resistances to Fighting, Grass and Bug Type moves.

Fast Attacks are Quick Attack and Wing Attack, both STAB. Charged Attacks are Heat Wave (I will admit I have no earthly idea how it knows this one.) Close Combat and Brave Bird. The latter of which is, of course STAB. The Community Day Attack, Gust, will inevitably replace Wing Attack as the better option for STAB damage.

The Shiny is just a more reddish shade of brown than the usual and as such is going to be a bit tougher to spot. Be observant when hunting and you should be fine!

And that’s all I got for you this month, Trainers. Thanks so much for taking the time to check out this Spotlight! As always, I wish you the absolute best of luck!