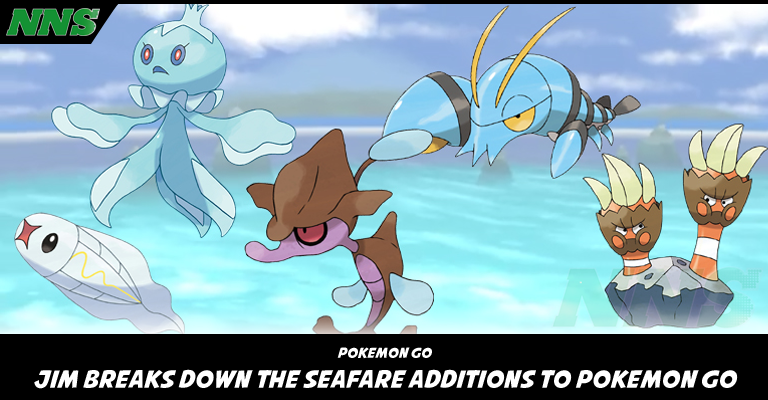 Welcome, Trainers! We have a couple of new critters to chase around the countryside and I thought it was a good time to detail them for you! We have two from Unova and three from Kalos! 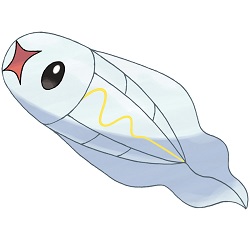 Tynamo is a cute little fellow – based on a tiny electric eel, this Pokemon doesn’t generate much electricity on its own. When in schools, however, they can certainly school most opponents by combining their power to shockingly good effect! Teamwork makes the dream work, after all! 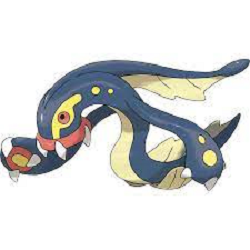 When it evolves into Eelektross, this Pokemon is known for having strong arms that it uses to come ashore. It hunts out of the water, latches onto prey then drags its unfortunate foe back into the ocean. Yikes! Due to its Typing and Ability (Electric and Levitate.) in the main series games, it has the distinction of having absolutely no Types that are Super Effective against it! (Electric moves don’t affect Levitating Pokemon.)

So, does this translate into Pokemon GO?

With a Max CP of 3089, Attack of 217, Defense of 152 and Stamina of 198, it’s not terrible, but not great either. Low Defense is offset at least somewhat by better than average Stamina and fairly good Attack. It doesn’t, however, get to keep that Levitate ability so this pure Electric Type deals with damage from Ground Type moves the same way every other Electric Type does. It resists Electric, Steel and Flying Type Attacks, though.

In terms of moves, it has Acid and Spark as Fast Attacks, the latter of which is STAB. Charged Attacks are Acid Spray, Dragon Claw, Crunch and Thunderbolt, with only the last of these being STAB. Spark and Thunderbolt is your best move set option. 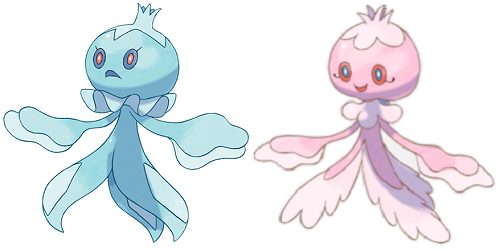 Frillish is an interesting Pokemon in that it was designed for Unova before GameFreak realized that they had no actual fish Pokemon in the region. (My grievances against Basculin are many and detailed Here) As such, it’s one of Unova’s very few Water Types. It has a fairly unique Typing as well, being Water/Ghost. Much like Nidoran, it has a Male and a Female variant that are drastically different in appearance, especially color, but unlike the Nidorans, they generally share one Pokedex entry with no separate species status required. This is true in all cases but one; Sword and Shield. The Male and Female have separate entries in Generation 8 and while the Male entry is the same across both versions, the Female entries are different between Sword and Shield.

Speaking of the Pokedex, it tells us that this Pokemon is known for drifting up to prey, wrapping it in veil like tentacles before stinging it into paralysis. It then drowns the poor, unfortunate soul on the way down to its lair which is about 5 miles below the surface. In Sword and Shield we have separate entries for the Female Frillish and those entries state that females of the species have longer stingers. They also speak of a legend whereby members of an ancient, sunken society transformed into these Pokemon. I guess that makes sense, being as they’re Ghost Types too.

Anyway, once this Pokemon evolves, it becomes Jellicent.

Jellicent, much like Tentacruel before it is mostly made up of sea water. This is in reference to real world jellyfish (Or sea jellies if you want to be more scientific about it.) who are also mostly water – up to 97% in fact! It absorbs and expels this water to move around the ocean. It makes its lair out of sunken ships and many ships that enter its territory are never heard from again, which is fairly grim. It will flock around fancy cruise liners, just hoping to sink them and drag away prey. Benevolent these Pokemon are not! There’s a rumor that there exists a Jellicent castle under the sea somewhere comprised entirely of sunken ships piled on top of one another. Scary as heck! They feed on life energy and in the case of female Jellicent, the larger the crown on their head, the more they’ve absorbed.

So, can they sink all your hopes and dreams in Pokemon GO? 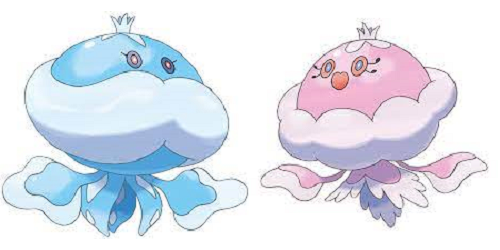 With a Max CP of 2644, Attack of 159, Defense of 178 and Stamina of 225, this Royal Jelly is more of a pauper than a prince. Decent Stamina is let down by poor Defense and Attack. Its Water/Ghost Typing is unique though and it offers a whopping 8 Resistances – Water, Normal, Fighting, Ice, Fire, Bug, Poison and Steel. Not too shabby! But it does have four weaknesses in Dark, Ghost, Grass and Electric.

Male and female, despite looking quite different, share all Stats and Attacks. 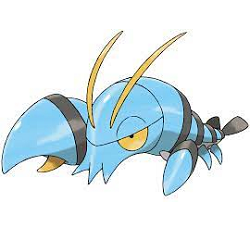 Clauncher is one of my favorites from Generation 6. It’s just so cute! The Pokedex informs us that this Pokemon is delicious! No surprises there. The right claw allows it to jet water out, both to attack and to travel at high speed. It can shoot that water to knock airborne prey into the water where it will be promptly devoured.

Much like Clauncher, Clawitzer is apparently delicious! It uses that huge, meaty claw to suck in water and then shoot it out in a cannonball formation powerful enough to rip apart steel tanker hulls and pierce thick slabs of iron. It uses the antennae on its claw to detect prey which it shoots water at.

So. Will it tear apart your Iron Defense in Pokemon GO? 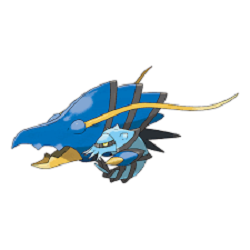 With a Max CP of 3124, Attack of 221, Defense of 171 and Stamina of 174, it has an okay level of Attack power, let down by average bulk. It’s a pure Water Type, meaning all the standard resistances (Water, Steel, Ice, Fire) apply, as do the standard weaknesses (Electric and Grass.)

Fast Attacks are Smack Down and Water Gun, the latter of which is STAB. Charged Attacks are Ice Beam, Dark Pulse, Crabhammer and Water Pulse. The latter two are STAB. 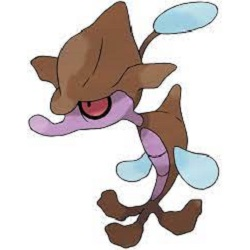 Horsea’s emo cousin makes its Pokemon GO debut as well! Brown and purple with eyes that are red and sort of ominous, there’s something kind of fascinating about its design. It’s a master of camouflage, blending in with scraggly, rotten kelp it remains perfectly still until prey approaches at which point it poisons them and then eats ’em. Ew. This strategy may not work as well as you’d expect as rotting vegetation still makes up the larger part of its diet. It starts life as a Water/Poison Type.

When it evolves into Dragalge, though, something miraculous happens – it becomes Dragon/Poison! What a switch! This was, I believe, a way to make at least one Dragon able to take on the new Fairy Type in Pokemon X/Y. Anyway, here’s another Pokemon who’s mostly known for destroying ships. What is it with water Pokemon and putting holes in iron hulls? Anyway, it’s known for indiscriminately shooting highly caustic poisons at anything that enters its territory. Yes, including ships, many of which never return to port.

So, how does this dinghy destroying dragon fare in Pokemon GO? 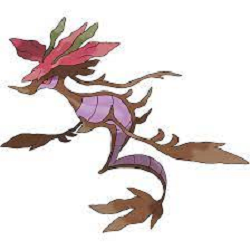 With a Max CP of 2694, Attack of 177, Defense of 207 and Stamina of 163, this is one of the most underwhelming of the fully evolved Dragon Type Pokemon in the game. Its Typing is unique, providing resistances against Water, Electric, Fire, Fighting, Bug, Poison and especially Grass. It’s weak to Ice, Psychic, Dragon and Ground. 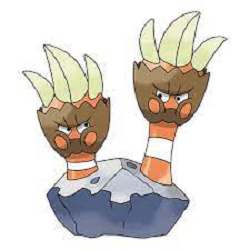 Binacle is two, cute, squishy faced li’l guys sharing a rock. Awe. They have to cooperate in the pursuit of food or neither one will survive. If animosity between the two grows to be too much, one will detach and find itself a different rock to live on with a more suitable partner. They eat old seaweed that’s washed ashore.

When it evolves into Barbaracle, the power of two becomes the power of seven! Each portion of its body is a single Binacle, fused to the rocks and its team mates. It’s like Voltron, but made out of Binacle! It fights with all the power at its disposal, even allowing each limb to act on its own if necessary, though, they usually just do as the head commands.

So, how well does it do in Pokemon GO? 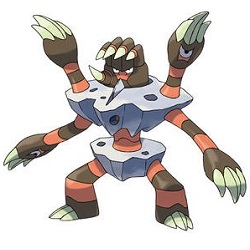 With a Max CP of 3025, Attack of 194, Defense of 205 and Stamina of 176 this Pokemon is, unfortunately, average. It’s a Rock/Water Type so it has resistances to Flying, Ice, Poison, Normal and especially Fire. It has a special weakness to Grass, of course, but also to Fighting, Electric and Ground Type Attacks.

And there we have it, a detailed dossier on these denizens of the deep! As always, I wish you all good luck in securing some of these for your Team!